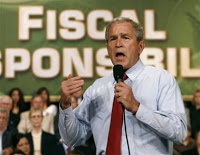 from reuters: Deepening unhappiness with President George W. Bush and the U.S. Congress soured the mood of Americans and sent Bush's approval rating to another record low this month, according to a Reuters/Zogby poll released on Wednesday.

The Reuters/Zogby Index, which measures the mood of the country, also fell from 98.8 to 96 - the second consecutive month it has dropped. The number of Americans who believe the country is on the wrong track jumped four points to 66 percent.

"There is a real question among Americans now about how relevant this government is to them," pollster John Zogby said. "They tell us they want action on health care, education, the war and immigration, but they don't believe they are going to get it."