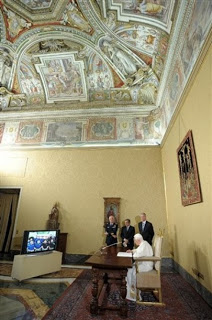 from sky news: The 12 astronauts circling the Earth have received a call from Pope Benedict XVI – the first-ever papal call to space. The pontiff addressed the shuttle and station crews from the Vatican. The Pope said he admired the astronauts’ courage, discipline and commitment. He added that he hopes the condition of shuttle commander Mark Kelly’s wife continues to improve. House of Representatives lawmaker Gabrielle Giffords, Kelly’s wife, was shot in Tucson, Arizona, in January. Mr Kelly thanked him for his kind words. The long-distance papal audience was arranged by the European Space Agency and the Italian Space Agency. Nasa provided technical support from Houston.