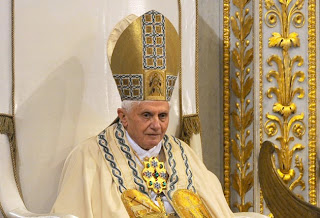 pope’s organs too holy to donate to mortals

from independent: Benedict XVI has tried to scotch rumours that he carries an organ donor card after his secretary revealed that his ascension to the position of Holy Father means he is no longer able to bequeath his body parts to lesser mortals. On the pontiff's instructions, Monsignor Georg Gaenswein, Benedict's personal secretary, fired off a letter to quell the rumours that started in the Pope's native Germany. "It's true that a simple cardinal can have an organ donor card but, despite public declarations to the contrary, it ceased to apply when he was elected head of the Catholic Church," Mgr Gaenswein said.