Former President triumphs Warren Commission at Ford’s funeral; Are the Bush’s breaking down?

from prison planet: During his speech at yesterday’s funeral service for Gerald Ford, former President George H.W. Bush bashed JFK “conspiracy theorists” and defended the Warren Commission report, another odd public outburst indicative of a crime family whose decades of misdeeds may finally be catching up with them.

“After a deluded gunman assassinated President Kennedy, our nation turned to Gerald Ford and a select handful of others to make sense of that madness,” said Bush. “And the conspiracy theorists can say what they will, but the Warren Commission report will always have the final definitive say on this tragic matter. Why? Because Jerry Ford put his name on it and Jerry Ford’s word was always good.”

The only thing Ford was good for was running defense for criminals when he pardoned the remorseless Richard Nixon and others after Watergate, allowing larcenous felons to walk free and leaving the legacy in place that it’s OK to break the law if you are the President, a form of absolutism that has been keenly inherited by the current crop of crooks, including Dick Cheney who praised Ford for ‘allowing the nation to heal’ by protecting a cadre of organized crime gangsters. 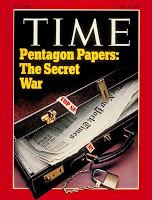 Of course, all of this had nothing to do with liberals or conservatives, bricklayers or office clerks,” writes Kurt Nimmo, “It had to do with breaking the law, with “dirty tricks,” snooping on political opponents, sabotaging Democratic presidential candidates, going after Daniel Ellsberg for the public service he provided by bringing the Pentagon Papers to light, ordering the FBI to investigate CBS News reporter Daniel Schorr, discussing the possibility of having newspaper columnist Jack Anderson assassinated, and other crimes (evading taxes, accepting illicit campaign contributions, ordering secret bombings, and harassing opponents with executive agencies, wiretaps, and break-ins), all of it culminating in Watergate.”

There’s no doubt that Ford, not unlike Saddam Hussein who died days after, knew where the bodies were buried and Bush was simply eulogizing his noble service in sweeping the JFK assassination under the rug, shielding Poppy himself from serious questions about his own involvement in events at Dealy Plaza.

As Wayne Madsen comments, “The elder Bush cannot really remember where he was on November 22, 1963. He later claimed he was in Tyler, Texas although there is evidence that he was checked into the Dallas Sheraton Hotel that day. Mr. Bush, the conspiracy theorists will continue to say what they will until you start telling the truth about Zapata, de Mohrenshildt, Mongoose, New Orleans, and JM/WAVE.”

Bush senior’s outburst marks the second time in the same amount of months that he has felt the need to publicly attack those who would normally be relegated to the fringes of political discourse by big media consensus.

During an appearance with his wife Barbara on Fox News in November, George Bush Sr slammed Internet bloggers for creating an adversarial and ugly climate, echoing the rhetoric of fellow Neo-Cons and the White House itself in trashing the reputation of the world wide web and the political blogosphere.

The fact that Bush is being pressured into bad mouthing so-called “conspiracy theorists” and bloggers proves that the chorus of dissent is beginning to make these cretins lose some sleep at night.

The Bush family as a whole is starting to exhibit some seriously offbeat behavior that suggests their decades of underhand chicanery, murders, cover-ups and scams are finally beginning to catch up with them.

Last month Bush senior burst into tears during a speech at his son Jeb’s leadership forum. Jeb Bush himself recently declared that he had “no future” in politics. George W. Bush’s obvious deteriorating mental acumen, characterized by a consistent supply of “Bushisms,” has led several commentators to conclude that the current President is in the early stages of pre-senile dementia. The Bush daughters’ behavior doesn’t seem to be maturing with age either after U.S. Embassy officials strongly urged them to cut short last month’s escapade in Argentina.

Are the Bush’s breaking down? Is the fact that the President is less popular than Osama Bin Laden, Saddam Hussein and Satan combined finally starting to provoke pangs of conscience amongst the notorious crime family?

Do any of the Bush’s even have a conscience?