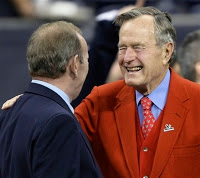 from paul joseph watson: An 83-year-old George H. W. Bush apparently made what could be his last pilgrimage to Skull and Bones over the weekend when he purportedly paid a visit to the tomb and rekindled his loyalty with the secret society death cult for the first time in nearly 10 years.

Skull and Bones is a secret society based at Yale University which recruits just fifteen members a year. The vast majority of its members have gone on to occupy positions of high power and influence...

Bush was in New Haven this weekend to pick up an award but according to eyewitnesses who saw special furniture and tables being unloaded outside the tomb, he was also likely guest of honor for Skull and Bones.

"Famously absent from Boner bashes in recent years (last appearance we can confirm was in 1998), all signs point to the 83-year-old Bush Sr. as guest of honor at the Bones' latest homoerotic leather-daddy Satan-worship, or ritualized flag-burning, or whatever strange and magical things they do in those windowless buildings on High Street. Obviously, the Bonesmen declined to comment on this story."

Of course the fact that future world leaders like to dress up like Klan members, letting fly blood-curdling screams as they slash imaginary victims' throats before kissing skulls and the fact that those same future world leaders then preside over the deaths of untold millions in brutal wars is nothing to worry about and we should all just forget about it and get back to watching America's Got Talent.