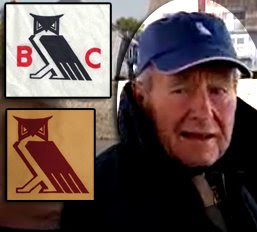 from aaron dykes: During a somewhat gimmicky Today Show interview with George H.W. Bush, the elder ‘41′ reminisced about his debates with Geraldine Ferraro, the only other woman to run for Vice President in a major party, who sat alongside him in a discussion about gender roles and discussed the significance of Sarah Palin’s VP candidacy in anticipation of the debate. At about 2:20 into the interview, the Today Show cuts to another location where the former President is wearing a ballcap displaying the Bohemian Grove owl logo along with his boastful ‘41′ wind jacket. As the screenshot indicates, the owl is distinctly that of the Bohemian Club, as shown in the noted designs. The elder Bush’s wearing it during a televised interview should be read as a ‘thumb up’ at the democratic will of the people and a reminder that the electoral process is little more than a sham thinly concealing the rule by secrecy that really goes on behind the scenes.