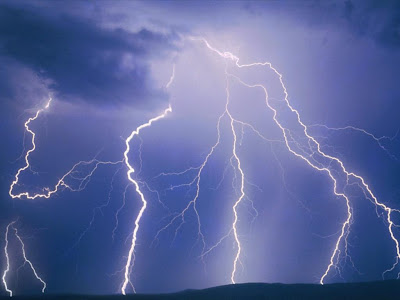 Cosmic Convergence 2012 website ponders need in recent article, "perhaps it’s time for the scientific community to verify these [electron chain] theories with data they can easily acquire," in response to a perceived increase in Positive Lighting Strikes (PLS). PLS "..are typically six to ten times more powerful than negative bolts, last around ten times longer, and can strike several kilometers or miles distant from the clouds. During a positive lightning strike, huge quantities of ELF and VLF radio waves are generated...," according to an article on lightning at electricalfun.com.

A 2008 Scientific American article, "Do Cosmic Rays Cause Lightning?" covers theory proposed by Physicist Alex V. Gurevich, who “...suggests that the movement of large showers of energetic particles produced by high-energy cosmic rays—which originate from exploding stars halfway across the galaxy—might provide a conductive path that initiates lightning."

The article contends there's "...no denying that Positive Lightning Strikes have been increasing in frequency and intensity for many years now. Since cosmic ray activity has been likewise increasing, we ask the physics research establishment to reveal whatever data that has been accumulated in this regard. In order for the residents of Planet Earth to make more informed decisions about how to better respond during these times of greater atmospheric electrical activity and positive lightning strikes."

Is it HAARP? The article asks, "is HAARP and the continuous and artificial charging of the ionosphere creating a much more conducive environment for Positive Lightning Strikes to occur everywhere across the planet?" HAARP shouldn't be overlooked as a possible contributing factor!

Cosmic rays would probably not be your first consideration for what initiates a lightning strike? It makes a lot of sense, however, a runaway breakdown of electrons gets started by highly energized interactions between cosmic rays and our upper atmosphere. Who would've thought?