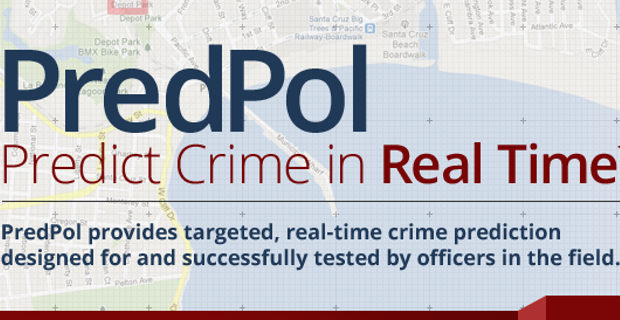 Predictive Policing And The Fantasy Of Declining Violence In America

from forbes.com: In May, NYPD Commissioner Bill Bratton told a City Council meeting that predictive policing “is real and it is here.” The LAPD has already implemented a predictive policing system,
using a network called PredPol developed by a private company of the
same name  that tracks crime incidence and location to predict where
crime is most likely to take place and allocate officers accordingly.
PredPol is also used in London, and has seen several pilot programs in smaller towns across England. Chicago Police have similarly developed a “heat list”
that identifies around 400 people most likely to commit a crime, many
of whom have been visited by law enforcement with warnings that they are
being watched.

These predictive tools have arrived at a time when police
surveillance of social networks and online behavior has become endemic.
When the NYPD raided the Grant and Manhattanville housing developments
arresting 103 alleged gang members in early June, it came after logging more than a million social media pages and 40,000 calls made from prison.
This combination of predictive tools that direct officers into certain
neighborhoods backed by an increasing number of channels to surveil
those who live in areas predetermined to be criminal is not new, but an
extension of a pathology of law enforcement that assumes a criminal
pretext by its mere presence in a community. It’s not predictive
policing that makes this phenomenon possible, but it takes it one step
further toward being totally irrefutable, secured by computer
objectivity that further distances people from any direct power within
the structures around them.

Most law officers already police preemptively through their legal
ability to instigate a physical encounter with a civilian and interpret
the response as criminal, something that’s become endemic in recent
times. Over the weekend, Arizona State University professor Ersula Ore was arrested on charges of aggravated assault against a police officer
after being stopped for crossing a campus street to avoid construction.
When she asked the officer why she pointed out that there was
construction obstructing the way she was told she would be slammed onto a
car and arrested if she didn’t provide identification. When she pressed
her point, arguing that the stop was unnecessary, she was slammed onto a
car then thrown to the ground. As she was pulled up off the ground her
leg made contact with the officer’s, leading to a charge of aggravated
assault against a police officer. After reviewing dashboard video of the
event, the police department released a statement saying there was no
police misconduct.

Stories like this are horrific, yet so numerous they can feel
impossible to keep separate from one another. During a recent protest in
Stockton, Carey Downs was arrested and
charged with obstructing a police officer and resisting arrest after
being shoved to the ground by police and instinctively reaching for a
baton as he fell. He was marching through the city with a group of
protestors that included elderly women and children in his memory of his
son James Rivera, who had been shot 48 times and killed by police in
2010. In Alpine, Texas, police raided a local smoke shop run by two
sisters. After questioning one of the officers about the validity of the
search warrant (which had no address or names listed on it), one of the
sisters, Arielle Lipsen, claims she was thrown to the ground and hit in the neck with the butt of a DEA agent’s rifle.
As she fell one of her legs allegedly made contact with the agent’s leg
and Lipsen was  arrested for assaulting a federal agent.

What joins all these disparate stories is an underlying legal
structure that allows police near total discretion to initiate violent
interactions and interpret what is and isn’t criminal against them ex
post facto. The American Constitution Society describes these as “cover arrests,”
intended “to help justify or explain an officer’s use of force or other
exercise of authority,” something the group argues has become
dangerously widespread. These cover arrests are regularly upheld by
courts by virtue of broadly vague and inconsistent laws governing police
behavior. Washington D.C.’s law are characteristically unclear,
with the misdemeanor class of assaulting a police officer defined as a
anyone who “without justifiable and excusable cause, assaults, resists,
opposes, impedes, intimidates, or interferes with a law enforcement
officer on account of, or while that law enforcement officer is engaged
in the performance of his or her official duties…” This description
leaves almost an alarming variety of physical interaction open to being
called as misdemeanor assault, and has been used to prosecute and
convict a man for holding onto his steering wheel while a police officer
tried to pull him out of his car to a woman who refused to take her
hands out of her pockets.

With laws so broad and trials often depending on competing testimony
of officer and the accused, we have built a culture where a police
officer interpret anything other than total compliance as criminal,
justifying even further violence. Efforts to curb improper police
behavior must always be deferred, dealt with ex post facto through a
prejudicial bureaucracy that is barely functional.  A study from the University of Chicago found that out of 10,149 formal complaints made against Chicago Police Department,
only 19 resulted in suspensions of one week or more. In New York,
complaints against police officers are handled by an independent
organization, the Civilian Complaint Review Board, but NYPD largely
ignores its findings, with one survey finding 64% of cases recommended for administrative trial resulted in no disciplinary action.
Almost half of the most serious disciplinary recommendations were
reduced to verbal admonishment and loss of vacation days. A 2010 survey
of police misconduct found that officers are much less likely to be charged with a crime than civilians in contested cases.

In 2012, an Indiana law was passed making it legal to use deadly force against police officers
to protect against illegal entry into a person’s home or vehicle. The
law expanded the 2006 “Castle Doctrine” to address the hypothetical
scenario described by state senator Michael R. Young, in which if a
person came home to find a police officer raping their spouse or child
the only legal response would be to file a lawsuit and wait years for
adjudication. The law has drawn wide criticism from its potential to
promote violent confrontation, but it underscores the absurd
disempowerment most citizens have in any given encounter with police,
which, when combined with minority groups predetermined to be criminal
by aggregated data and decades of accreted prejudice and systemic
exploitation, becomes a toxic license to do almost anything.

It’s often claimed that violence in America has dramatically
decreased in recent years. According to Bureau of Justice Statistics, in 2009 there were 15 violent crimes per 1,000 people
over the age of 12, down from 51.2 per 1,000 in 1994. During the same
period, the US incarceration rate has more than doubled, capping a
decades long increase with more than 2.4 million currently imprisoned. A
recent Pew survey found that 1 in 31 American adults are currently imprisoned, on parole, or serving probation. As is often noted, roughly 95% of all federal cases end in plea bargains in
which coerced admissions of guilt are exchanged for leniency. As
violence in prisons and jails is incredibly difficult to measure and
often goes unreported, it’s likely that America isn’t a less violent
country but has simply moved its violence into a special legal category
that makes it effectively invisible. This de facto admission that
pursuing justice against improper or violent police behavior is too
expensive, slow, and terrifying an ordeal for most to go through has
greatly contributed to the transformation of police impunity into a
weapon unto itself.

It’s easy to think of technological advancements as agents of
historical progress, but it’s also true that progress is driven by
desire toward a particular outcome. The emergence of predictive
policing, and the easy ability to scrape social networks and Internet
hubs, feels alarmingly new, a specific product of our present form of
modernity. It is so disturbing because it proves our desire to be
insulated from violence is self-defeating and has now jumped outside
ourselves and taken shelter in semi-autonomous machines that watch
us. Worse yet it shows how much violence has become institutionally
normalized in the decades leading us up to this historical embarkation.

Predictive policing doesn’t represent a new structural shift in
society so much as it expands a pre-existing one, making millions of
people suddenly aware of how much their sense of freedom and dignity
depended on never drawing the attention of a cop, a luxury that is
growing increasingly scarce and expensive to secure. Now that our lives
are more visible to authority than ever before, there should be some
nauseous recoil at how fake, selfish, and deluded our past sense of
security was as we look forward to a future in which the surest way to
protect one’s self is to remain unseen, something that will very soon
become impossible.