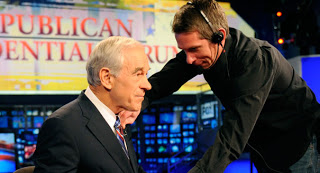 from ap: Long before he discovered Friedrich Hayek and other free-market economists, Ron Paul got a lesson in sound money from his oldest brother, Bill. It was the height of World War II, and the Paul boys were laying aside quarters from their Pittsburgh Press routes and pooling pennies earned from pulling dirty milk bottles off the line at the family dairy to buy war bonds. One day, Ronnie suggested what was, in retrospect, a rather Keynesian solution: "Why doesn't the government just PRINT this money?"

Washington bureaucrats, Paul says now, "would like it to be complicated, and that we have to accept this complex monetary system of the Federal Reserve. But it's no more complicated than two little kids talking ..."

It's not complicated, he insists. These are the themes he has been addressing, consistently, since he entered politics in 1974, over the course of 12 terms in Congress, through his third bid for the White House: Free markets are good. The Federal Reserve is evil. The gold standard should be restored. Government is the cause, not the cure, of the nation's troubles.

update2: ron paul draws big crowds and many undecided voters in iowa*
will the 2012 election be a contest of whole foods vs. cracker barrel shoppers?*
newt gingrich, marianne and the arms dealer: a buried fbi investigation*
obama's popularity at all-time low*