from monterey herald: The loud booms coming from the Presidio of Monterey on Friday will likely be an anti-terrorism exercise.

The exercise is scheduled through the day, and the High Street gate will be closed from 8 a.m. to 5 p.m., according to officials from the Defense Language Institute and the Presidio of Monterey.

Simulated explosions may be heard and emergency vehicles may be on site, but all are part of the exercise, said Daisy Bueno, a public affairs officer for the Presidio.

Normal operations should not be affected and offices will remain open during normal business hours. 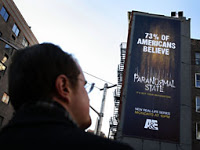 from listening post: Walk by the billboard for the new A&E show "Paranormal State" on Prince Street in Manhattan, and you could find yourself targeted by a narrow beam of sound projected from the ad using technology from Holosonics, which specializes in creating "audio spotlights" that are audible only to the person whose cranium they hit. Not even earplugs will keep the beam out, because it apparently vibrates within the head.

According to Ad Age, the voice says, "Who's there? Who's there?... It's not your imagination."

The president and founder of Holosonics, Joe Pompei, denies that his technology is utterly annoying and wrong. If that were his goal, he says, he would have used a loudspeaker instead of the beam.

"If you set up a loudspeaker on the top of a building, everybody's going to hear that noise. But if you're only directing that sound to a specific viewer, you're never going to hear a neighbor complaint from street vendors or pedestrians. The whole idea is to spare other people."

thanks to daily dose of terror