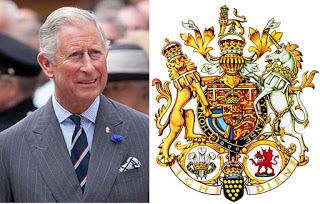 Prince Charles seems a traditional symbol of monarchy rule - almost out of another time? The prevailing view, Charles will be passed over for the throne in favor of his son Prince William. However, ruling elite communicate truth through cryptic symbolism not shared with the profane (public). In "False Messiah - 'Prince Charles of Wales,'" Sabbathcovenant.com makes readers pause, to reconsider, Prince Charles' role in world affairs. The article uses the Bible to track down our man finding, "...over 57 clues so that End Time Saints may accurately and definitively identify the 'Beast' or False Messiah... follow the Bible as God narrows down the candidate to only one." A convincing case takes shape with only a few highlights addressed here.

The provided numerical equivalent in Gematria or meaning of Prince Charles' title from the article is most interesting:

"Prince Charles of Wales in actual Hebrew is pronounced 'Nasich Charles Mem Wales'. The Hebrew pronunciation itself equals 666 in Gematria. Is it coincidence that Prince Charles official title 'Prince Charles of Wales' equates to 666 in its English form and corresponding Hebrew and Greek forms. And then even when translated form English into Hebrew and then compared to Gematria it still equals 666. The statistical odds are astronomical making this absolutely impossible and a complete modern miracle."

The long odds of title "Prince Charles of Wales" designated in Gematria as "666" in three languages, provides first pause in reader's mind.

The famous numerical designation "666" from Revelation 13:18, gets examined, with greater nuance than present writer has been exposed to date: Rev. 13:18: "Here is wisdom. Let him that hath understanding count the number of the beast: for it is the number of a man; and his number is Six hundred threescore and six." The article informs from Onomastics, a study of proper names, Charles means man.

The question then becomes which Charles is "the Beast?" Rev. 17:10-11: "And there are seven kings: five are fallen, and one is, and the other is not yet come; and when he cometh, he must continue a short space. And the beast that was, and is not, even he is the eighth, and is of the seven, and goeth into perdition." The article provides an elegant interpretation below:

"There have been seven Charles as Emperors of the Holy Roman Empire. World Book Encyclopedia and other reference documents summarize the history of the Holy Roman Empire by these seven kings. This is a historical fact. But what makes this prophecy such a puzzle is its reference to the beast being 'also an eighth, and is one of the seven.' The answer is simple and right before us. They all have the name Charles. Prince Charles will be the eighth when he rules over the ancient Holy Roman Empire (the modern European Union). How is he one of the seven? He is a direct descendant of the Charles VI through the Hapsburg line."

With keen insight, article contends John recorded in Revelation what he "saw" - a literal clairvoyant vision - of Prince Charles' family coat-of-arms (picture, right). "It is called his coat-of-arms. This set of symbols is reserved strictly for him and is controlled by the college of heraldry. It is his ancient calling card." In Rev. 13:1-2: "And I saw a beast coming up out of the sea, having ten horns and seven heads, and on his horns were ten diadems, and on his heads were blasphemous names. And the beast which I saw was like a leopard, and his feet were like those of a bear, and his mouth like the mouth of a lion. And the dragon gave him his power and his throne and great authority."

The article makes it look easy by pointing out "the Beast" a leopard-like creature in upper left and "the Dragon" in lower right of coat-of-arms (picture, right). It's right in front of us if only we have "eyes to see":

"The beast is a composite creature depicting the past: the body is that of a leopard, the feet are from a bear, and the head (mouth) is that of a lion. The past emperors of the Roman Empire were from France (leopard), Germany (bear), and England (lion). This is the definition of the Heraldic Beast from the college of heraldry and its has existed for the past 500 years. It also matches the exact description as seen by the Apostle John in the book of Revelation."

"The dragon comes from the flag of Wales. Prince Charles of Wales is more than just a name. It is the title of the heir apparent the next in line for kingship. The red dragon dates back to the ancient Romans. Britannia was the head of the Western Roman Empire and the symbol of Roman antiquity was a red dragon. It is also the symbol that was seen by John to give the beast his power, throne, and great authority."

The article concludes amazing display of Bible interpretation: "Fascinating. Nothing hard about it. All we have to do is listen to God and trust that everything He said is literal and as simple as the text on the page. It is not figurative or interpretive. Does not require fancy manipulation. Just faith to believe the simplicity of it all. Now that we have further evidence that Prince Charles of Wales is the False Messiah. His official title in every translation is 666 in Gematria. His symbol or Coat-of-Arms was actually 'seen' and described by the Apostle John in Revelation."

The present writer found this interpretation of Prince Charles as "the Anti-Christ" compelling! Writer Tim Cohen made many of the observations in book, "The AntiChrist & a Cup of Tea," some years ago! It's still a "Wow" moment, even if you find yourself playing catchup as the present writer!