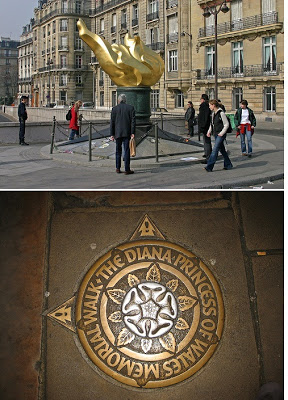 Vigilant Citizen (VC) writes in 2012 article for those willing to work to recognize occult symbolism, in order to have "eyes to see and ears to hear" just as an occult initiate would be attune to symbolism.  Occult symbolism is clearly out there, as a matter of fact, it's all over the place.  VC asks rhetorically:  "Why did Elton John dub Lady Di 'England’s Rose' [picture, bottom from a London memorial]? Was it because she was beautiful or because the rose has a deep occult meaning? " VC indicates after covering symbolism in Diana's memorials - especially Diana as sacred feminine ideal - "...the association of Princess Diana’s memory with the rose, the occult symbol of female deity is used ad-nauseam. Maybe this is why Elton John has dubbed Lady Di 'England’s rose'. To regular-minded people, those associations are insignificant but to initiates of the occult, symbolism is EVERYTHING." Princess Diana fits certainly role of Goddess Diana as VC points out:  "In Roman mythology, Diana was the goddess of nature, childbirth, hunting and the protector of the weak. She is the equivalent of the Greek goddess Artemis and she represents the Sacred Feminine, the female aspect of deity. The female principle is often represented by the moon, where the Moon goddess is opposite to the Sun god . The feminine energy is also commonly associated with the planet Venus, represented in symbolism by a five petal flower – the rose...The burial site of Diana cements her
association with the ancient Goddess Diana who was worshipped in recluse
groves outside of urban areas."


Was Princess Diana groomed for role long ago? Was it Diana's destiny all along to be sacrificed?  Diana's role in life has much that corresponds with the Goddess Diana.  The site of the fatal "accident" also raises eyebrows as Pont d’Alma Tunnel or "Bridge of Souls" was used, centuries ago, as a pagan sacrificial site during reign of Merovingians in Paris.  VC clearly explains:

"The truth lies in the symbols placed on purpose for the initiates to recognize. One of them is the actual site where Diana lost her life, the Pont D’Alma Tunnel.

The Pont D’Alma Tunnel was a sacred site dedicated to the Moon Goddess Diana, where they used to practice ritual sacrifices. During those ceremonies, it was of an utmost importance that the sacrificed victim died inside the underground temple. The assassination of Diana was a reenactment of this ancient pagan tradition. 'Pont' means 'bridge' and 'Alma' means 'soul' and for Merovingians, the site was a bridge across the 'river of souls'. So, Pont de L’Alma, the site of the accident which killed Princess Diana, means 'Bridge of the Soul.'

If you know a little about occult symbolism, a torch mounted on a black pentagram might make your radar go off. The torch  [picutre, top]  is the ultimate symbol of the illuminated (people that have acquired the secret knowledge of the occult order)."

VC points finger at Illuminati elite for going to extraordinary lengths in planning such sacrifices: "Diana has been elevated to the level of Goddess in order to become the object of ritual sacrifice. This practice has been carefully planed by a secret group of illuminated people, often referred to as the 'Illuminati'. It comprises world leaders such as the British Monarchy and they are known to be DEEPLY versed into dark occult rituals."   By all appearances, present writer can only agree not to mention 90 minute delay to arrive at a hospital.  How long does a ritual sacrifice usually last?