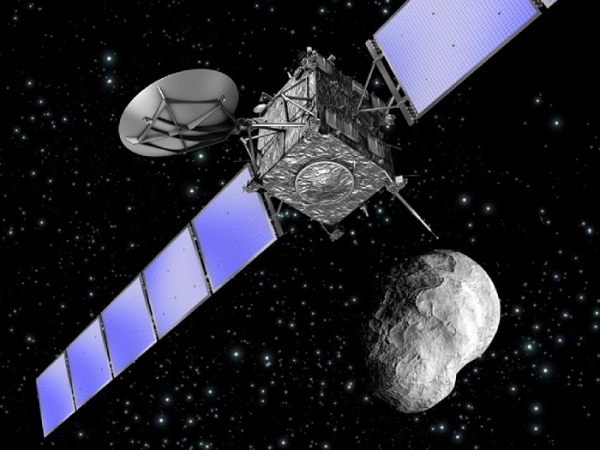 from spacedaily.com: The space probe Rosetta made a historic rendezvous with a comet on
Wednesday, climaxing a 10-year, six-billion-kilometre (3.7-billion-mile)
chase through the Solar System, the European Space Agency (ESA) said.

"We're at the comet," Rosetta's flight operations manager, Sylvain
Lodiot, declared in a webcast from mission control in Darmstadt,
Germany.

It marks the first time a spacecraft has been sent into orbit around a
comet, a wanderer of the Solar System whose primeval dust and ice may
hold insights into how the planets formed.

In November, a robot scientific lab called Philae will be sent down to the surface to make the first-ever landing on a comet.

Rosetta's rendezvous with Comet 67P/Churyumov-Gerasimenko was confirmed
at 0929 GMT at distance of 400 million km from Earth, according to
signals received at ground stations.

ESA Director General Jean-Jacques Dordain hailed the fruit of 20 years'
work to design, build and launch the three-tonne craft and then steer it
to a tiny target in deep space.

"Rosetta is a unique mission, unique by its scientific goal," Dordain
said. "Understanding our origins is certainly the best way to understand
our future."

On its Twitter page, the Rosetta mission said "Hello, comet!" in each of the languages of the agency's 20 nations.

"It's a historic meeting and a great first in world science, which the
global space community has been awaiting for a decade," said Jean-Yves
Le Gall, president of France's National Centre for Space Research
(CNES), a major contributor to the project.

ESA showed a close-up picture of a gnarled, greyish object, which
rotates on its side once every 12 hours, comprising two lobes joined by a
neck -- a feature that made it look rather like a rubber duck.

The surface is pocked by what seem to be impact marks.

Project scientist Matt Taylor said the unexpected shape could have come
from two comets that joined together, or perhaps from a single object
that eroded dramatically over time.

Mark McCaughrean, an ESA senior science advisor, cautioned that the
images had been digitally brightened, for the comet was extremely dark.

"It's blacker than fresh asphalt... an incredibly dark, grey object," he said.

Launched in March 2004, Rosetta had to make four flybys of Mars and
Earth, using their gravitational force as a slingshot to build up speed
to catch up with its prey.

It entered a 31-month hibernation as light from the distant Sun became
too weak for its solar panels. The slumber ended in January with a
wake-up call sent from Earth.

It then began a complex series of manoeuvres to slow down to walking speed with the comet.

If any one of those operations had failed, the probe would have gone whizzing past its target.

The final manoeuvre was a small firing of thrusters, lasting just six
minutes and 26 seconds, which placed Rosetta on a triangular orbit
around the comet at a height of about 100 kilometres (60 miles).

Rosetta will gradually reduce altitude, entering gravitational orbit in
September, as scientists search for a landing site for Philae.

Comets are believed by astrophysicists to be ancient ice and dust left
from the building of the Solar System around 4.6 billion years ago. This
cosmic rubble is the oldest, least-touched material in our stellar
neighbourhood.

Understanding its chemical ID and physical composition will give
insights into how the planets coalesced after the Sun flared into light,
it is hoped.

It could also determine the fate of a theory called "pan-spermia," which
suggests comets, by smashing into the infant Earth, sowed our home with
water and precious organic molecules, providing us with a kickstart for
life.

The four-km comet returns around the Sun on an egg-shaped orbit every
six and a half years, its furthest point being beyond Jupiter.

Early next year, dust and ice crystals, stripped from its surface by the
warming Sun, should form a long wake, creating the famous comet "tail"
reflected in solar rays.

Next August, the comet will be at perihelion -- the closest part of its
journey to the Sun -- a distance of around 186 million km from our star.

The mission is scheduled to end in December 2015, when Comet "C-G" heads
back out into the Solar System, escorted still by Rosetta.