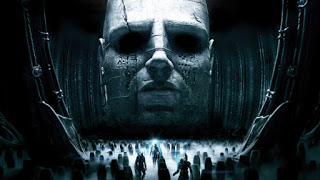 Vigilant Citizen (VC) views producer Ridley Scott's movie "'Prometheus':  A Movie About Alien Nephilim and Esoteric Enlightenment," as a metaphor for spiritual enlighenment, more specifically, esoteric Illuminati enlightenment.  Prometheus, the giver of fire to mankind, is not only movie's title, but also, the name for the mission's ship sent to find the alien's planet.  VC deconstructs movie in detail to illustrate backdrop to human history, where aliens with superior abilities first bestowed original "mother culture" upon humanity. A first scene in the movie has an Engineer drinking a liquid, who then
dissolves after falling into water, evidently, seeding environment - the Earth with his DNA. The Engineers of humanity are discovered to be also its progenitors as their DNA is a match to the human genome.    VC explains the "Ancient Astronauts" theory, a lynchpin of movie, who the Watchers (Engineers) were and the Nephilim, their offspring from unions with human women.  A spiritual dilemma is pervasive throughout movie.

Elizabeth, our movie's heroine, wears Christian cross proudly that becomes symbol of spiritual dilemma that results from mission's findings.  Once, Engineers are confirmed as source of human life on Earth, VC makes the point this still poses no threat to Elizabeth's faith, "she therefore does not see a contradiction between believing in
Christianity and in the Ancient Astronauts theory simultaneously. She
still believes that God is the first creator of everything … but now she
has to add aliens to the equation."

"...the mission goes terribly wrong and everyone dies except her. After almost giving up, Elizabeth apparently has an epiphany and becomes determined to discover the truth about the aliens. Apparently, they abandoned humanity a long time ago and they were even planning to destroy earth. Something must have gone very wrong with human evolution.

At the end of the movie, she puts the cross back around her neck, signifying that she did not lose faith and that her quest for truth is now greatly spiritual. It is not about science anymore, but about the basic human need of having existential questions answered."

The importance of transhumanist agenda to the Illuminati isn't lost on VC, who observes:: "Other than Elizabeth, another non-human character survived, David the Android. David has great intellectual capacity, making him believe that he is superior to his human colleagues. Despite this fact, he is nevertheless crucial to Elizabeth’s quest – a subtle message stating that transhumanism is important in human evolution."

"That being said, is there any truth to the many stories and mythologies referring to a divine figure coming from above to impart knowledge to humanity? Do the figures of Prometheus, Lucifer, and the Watchers of the Book of Enoch have factual basis to them? Is there an “outside” source for humanity’s advanced and esoteric knowledge? Was there once a Nephilim-type “super-race” on Earth helping humanity develop itself, but ultimately corrupted it? Is this the “missing link” in human evolution? Is it the reason why humanity is self-destructive and somehow out-of-synch with the rest of the planet? Does this outside source come from aliens as suggested in Prometheus or from fallen angels and/or demons as written in ancient texts? Is this outside source behind the teachings of secret societies and behind … the Illuminati?"

The present writer suspects Prometheus serves to undermine Christianity, a first assault that suggests Jesus was an alien, thus, promoting a tainted "alien gospel" in place of the original!  A previous post is also available,"Prometheus:  A Lesson In Illuminati Relgion."