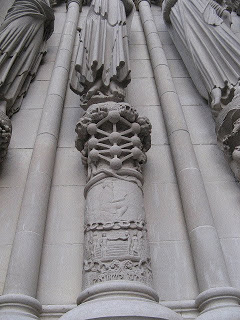 from vigilant citizen: One of the first articles published on this site was Sinister Sites – St. John the Divine Cathedral, where I’ve described the building’s occult symbolism and its role in the United Nations’ efforts to push a single world religion. Probably the most shocking part of that article was the pictures of the columns, conceived in 1997, depicting the destruction of New York city (including the Twin Towers). The Church was named after St. John the Divine, the author of the Book of Revelation. The original article showed only two of these columns (the others were not visible at the time I took the pics). Since then however, the other pillars are visible and their symbolism is as esoteric and mysterious as those originally posted.