from kgw: A conservative think tank has listed a Portland State University class as among America’s most dangerous college courses.

PSU Adjunct Professor Rick Rolf and his students will simultaneously celebrate and denounce the selection of his course, “Truth, Lies, Politics and Policy” by the Family Security Matters organization as one of “America’s Top Ten Most Dangerous College Courses,” Rolf said Tuesday.

He learned of his course’s selection from a student e-mail and at first thought it was a joke.

“On a whim I Googled the list and couldn’t believe my eyes. We were ranked the ‘6th Most Dangerous Course in America,'” he said. 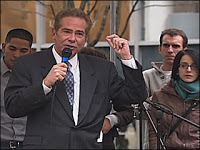 from katu: A Portland State University professor is fighting back after a national conservative group has labeled a politics class he teaches as the “sixth-most dangerous” taught in America.

“I think this mean-spirited sort of action is exactly what they’re trying to do is to muzzle people and to shut them down,” he told KATU.

2 responses to “psu class in top 10 ‘most dangerous’ courses”