pulling the tv cord yet staying plugged in

a small but apparently growing number of people are cutting the television service connections from cable satellite & telephone companies in favor of viewing their picks over the computer. 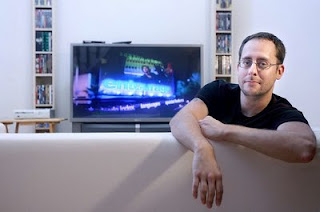 from latimes: Jazz musician Bill Cunliffe loves television - but he doesn't watch it on a TV set. "I can watch anything I want, any time I want," he said, "on my bottom-of-the-line Mac PowerBook." Cunliffe, 53, is one of a growing number of TV viewers who get all their programs via the Internet.

For reasons that include saving money, convenience, personal choice and a hatred of commercials, these viewers are cutting the cord from cable, satellite and telephone suppliers of TV service, and even throwing away the rabbit ears and other antennas that brought in over-the-air broadcasts.

"The idea that you come home and your entertainment choices are dictated on what some entertainment channel decides is not for me," said video game producer Chris Codding, whose Venice apartment has a 52-inch Sony television that's used only for video games and viewing DVDs. "I really like the concept of having something in your mind that you want to watch," Codding said, "and then going to the computer and watching it." ...

Shows are also available, unauthorized, on underground sites that are the bane of the TV (as well as movie) industry. "You can download just about anything you want right after it's broadcast," said one user of these sites who asked that his name not be used. "My wife asks for a show, and I can just go on and get it for her."

Cunliffe, who said he sticks to authorized sites, began watching online when TV went entirely digital in June. Up until then, he used rabbit ears to bring in broadcast stations. After the switch-over, he could no longer receive some of his favorite stations, even with a digital converter box.

He was ready to give up on TV until he discovered how easy it was to get programs online. Now he's ready to move up from his laptop screen. "I'm going to go out and buy the cheapest flat-screen monitor I can find and plug it in," he said. "I'm watching more TV than ever."

update/rebuttal: cord cutting?:
without data, the latimes writes the story it wanted anyway
from tv by the numbers: There seem to be a few memes that persist in the TV media world even though there is no data to back them up. One is the “Oprah ratings down because of Obama endorsement”, another is “Look at all the people cutting the cord” (i.e. canceling their subscription TV service). Recently it’s been spun as an after effect of the economic problems, in today’s LA Times cord cutting is touted as a combination of technology and consumer choice, which of course it is, and the anecdotal examples are charming, but the problem is the data just doesn’t support the fact that it’s a general phenomenon. In fact, total subscriptions to cable/satellite/telco TV services continue to grow slowly, as they have for many years. Who knows what will happen in the future, but it’s not happening now!

so, these 2 supposedly opposing pieces both come to the same conclusion: "i'm watching more TV than ever."