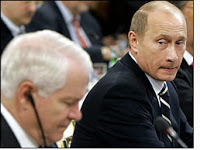 putin pushes back against ‘one single master’

from kurt nimmo: It displeased the neocons and their fellow travelers, including Robert “Iran-Contra” Gates, Joe Lieberman, John “Keating Five” McCain, and Lindsey Graham. Russia’s Vladimir Putin, in essence, told the neocons to back off and rethink their “unipolar world” rhetoric.

Predictably, the New York Times focused in on Robert Gates’ comments to Putin’s speech, at the expense of Putin’s remarks, and made a joke about “re-education” camps, a real enough prospect, considering the fascist tendencies of the neocons.

At any rate, regardless of the fact the corporate media here in Bushland have skipped over Putin’s speech almost entirely, it can be read in total on the Kremlin web site.