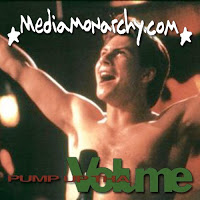 ****************************************
♬Liner Notes♬: So, I didn't actually go see Calexico... Lame, I know. (And Morrissey postponed his US tour dates?!) But damn, we've got a ton of Icelandic music this week as KEXP is spotlighting Iceland artist ahead of the 'Icelandic Airwaves' festival next week (So a lot of the band info may come through as garbled text thanks to the different languages). There's also new music from The Avett Brothers, Kid Koala and the one and only Orb! And after 30 episodes, that's one of the best reasons yet to Pump Up Tha Volume!

Jason Lytle
"Get Up And Go"
'Dept. of Disappearance'
ANTI-, 2012
Note: Stereogum says "Hot on the heels of finishing up a successful string of tour dates with the classic Grandaddy lineup earlier this summer, Lytle just released Dept. Of Disappearance — his second proper solo album."
(More Info)

Ghostigital
"Dark In Here"
'Division Of Culture & Tourism'
Smekkleysa/Bad Taste, 2012
Note: Song source KEXP says that "While some people may consider “Dark In Here” to be “weird” or “meandering”, they’re missing the point - whatever boundaries Ghostigital are trying to break here have been shattered by a duo with an earnest passion for pushing musical boundaries." Hailing from Iceland, Ghostigital features Einar Örn of The Sugarcubes.
(More Info)

Kid Koala
"2 bit Blues"
'12 Bit Blues'
Ninja Tune, 2012
Note: NPR says 'All Roads Lead To The Blues' - "Using equipment just as nostalgia-inducing as blues music itself, [Eric] San set out to record his album with classic hip-hop tools such as the SP-1200, an iconic drum machine and sampler from hip-hop's golden age. Making a conscious effort to outplay and out-think the machine, the turntablist strips the music down to its purest form — and hand-crafts 12 Bit Blues in a fashion that's never been heard before."
(More Info)

Solid Gold
"The Pendulum"
'Eat Your Young'
Totally Gross National Product, 2012
Note: The Star Tribune says "Almost four years have passed since Twin Cities music lovers first got hip to Solid Gold’s golden-hum of a debut album, “Bodies of Water,” and finally we have a chance to hear something from the band’s long-awaited follow-up record."
(More Info)

The Orb
"Ball of Fire" (w/ Lee Scratch Perry)
'The Observer In The Star House'
Cooking Vinyl, 2012
Note: The BBC says "And although The Orb harness a range of mostly down-tempo styles on the disc, it all hangs together rather well, and unlike many recent releases, nothing too objectionable passes Mr Perry’s lips. Overall, The Orbserver… is lots of fun for late-period Perry fans, and will appeal to Orbologists, too."
(More Info)

Ojba Rasta
"Hreppstjórinn"
'Ojba Rasta'
Records Records, 2012
Note: "The lyrics, you’ll notice right off the bat, are Icelandic, yet funny enough, their cadence feels Jamaican, and though you might not have a clue as to the words they’re singing, you know it’s gotta be about something good."
(More Info)

The Avett Brothers
"Geraldine"
'The Carpenter'
Universal Republic, 2012
Note: Paste Magazine sums it up about the prolific North Carolina band that seems ever-poised for world domination with "Frenzied finger-picking, dueling croons and high drama set to free-spirited pop progressions: these are the components that go into defining any given Avett Brothers record. Be it the remorseful poetry of 2006’s The Gleam or the sweeping anthems we’d last heard from them with I And Love And You, Scott Avett, Seth Avett, Bob Crawford and Joe Kwon together continue to strike a balance between traditional country sensibilities and the rock and roll of tomorrow with The Carpenter."
(More Info)

Úlfur Úlfur
"Föstudagurinn Langi"
'Föstudagurinn Langi'
self-released, 2012
Note: Song source KEXP wraps up the week-long Iceland spotlight by noting that "If you haven’t realized by now, Icelandic musicians can play pretty much any kind of music (this week, we’ve featured a variety of sounds on our Song of the Day podcasts), but you might still be thinking to yourself, “Icelandic hip-hop? No way!” Believe me, I was in the same boat the first time I saw Úlfur Úlfur perform. But they were barely through their first song when I realized, these guys are really freaking good!"
(More Info)