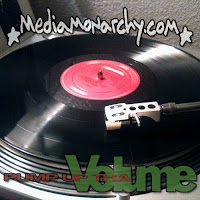 "♫Makin' a soundtrack for another planet to hear♫" on @PumpUpThaVolume! Episode057 - The Beauty Surrounds was recorded at the home studios of MediaMonarchy.com and features brand new #SongOfTheDay sounds from Houses, Stornoway, Thee Oh Sees, The Uncluded, Sabina, Caveman, Postal Service, Shout Out Louds, Laura Mvula, Besnard Lakes, On An On, Raul y Mexia and Dead Ship Sailing... because it can't be news and politics all the time!

Houses
"The Beauty Surrounds"
'A Quiet Darkness'
Downtown, 2013
Note: For starters, Stereogum says, "Chicago band Houses describes their interests on Facebook in four words: “Sustainable living, being alone.” Despite their isolationist tendencies, the band released a new video today for their single “The Beauty Surrounds,” off of their...third album A Quiet Darkness... A tale of heartbreak and loneliness set in the desert, “The Beauty Surrounds” video is as aesthetically beautiful as the story is depressing."
(More Info)

Thee Oh Sees
"I Come From The Mountain"
'Floating Coffin'
Castle Face, 2013
Note: Song source KEXP says, "Led by singer/guitarist John Dwyer, Thee Oh Sees’ frenetic take on lo-fi, psych, and garage rock is only amplified by the band’s tireless touring and recording schedule... Part-fuzz, part-adrenaline, all garage-rock fury, “I Come From The Mountain” sounds like a swirling, rapid-fire rocker that emerged suddenly from Dwyer’s Bay Area dungeon." I love that PUTV has already been going long enough to have some bands return with new work! We heard from Thee Oh Sees back on Episode025 and Episode028.
(More Info)

The Uncluded
"Delicate Cycle"
'Hokey Fright'
Rhymesayers, 2013
Note: "Aesop Rock and Kimya Dawson are not strangers. Dawson appeared on Aesop’s 2012 album Skelethon. Aesop made several appearances on Dawson’s 2011 album Thunder Thighs. The duo have formed a band: The Uncluded. Their debut album is called Hokey Fright, and it’s out May 7 via Rhymesayers."
(More Info)

Sabina
"Tabarly" single
unknown, 2013
Note: Song source KCRW says, "Sabina Sciubba is best known as the sultry voice of Brazilian Girls and Today's Top Tune is an exclusive preview from her new solo project about a noted French yachtsman, Eric Tabarly. It's simply called "Tabarly."" And that's about all I can find on this, obviously, newly announced album.
(More Info)

Caveman
"In The City"
'Caveman'
Fat Possum, 2013
Note: "Carrying aesthetics of shoegaze and Northwestern indie folk, “In The City” isn’t pretentious, academic, or any other “Brooklyn band”-worthy descriptor."
(More Info)

Postal Service
"Sleeping In"
'Give Up'
Sub Pop, 2013
Note: The 10th anniversary press release about one of the biggest records of this century simply says, "You can spend all the time and money in the world trying to craft the perfect pop-music scenario, but sometimes the stars have to align all by themselves. Even though early on the members of The Postal Service jokingly referred to Such Great Heights as “the hit” on their debut album, Give Up, there’s no way anyone could have predicted the eventual impact made by a mail-order album designed in a pair of West Coast bedrooms."
(More Info)

Shout Out Louds
"Illusions"
'Optica'
Merge, 2013
Note: After referencing the seemingly timeless sound of the 80s, NPR says you could find a worse decade to mine for inspiration. "Which brings us around to Optica, the new fourth album by the Swedish band , and particularly its song "Illusions." Listening to it in 2013, it's as if someone traveled back in time 30 years and slipped The Thompson Twins the biggest hit of their career, and now a young band is tapping into our shared nostalgia by rehashing a hit that's somehow been lodged in our memory banks all along. "Illusions" may be brand-new, but it already feels eternal."
(More Info)

Laura Mvula
"Sing to the Moon"
'Sing to the Moon'
RCA, 2013
Note: RTE says, "It's pronounced mmm-voola and rarely has onomatopoeia made more sense. This 25-year-old graduate of the Birmingham Conservatoire with a degree in composition has a spookily sensuous voice and the lush cinematic arrangements to match on her seductive debut. She's already been labelled gospeldelia, called "Nina Simone sings the Beach Boys", and won comparisons with sci-fi pop goddess Janelle Monáe."
(More Info)

Besnard Lakes
"People of the Sticks"
'Until In Excess, Imperceptible UFO'
Jagjaguwar, 2013
Note: Song source KEXP says, "their most recent album, strays from the traditional verse and chorus song structure. “People of the Sticks” undoubtedly showcases this design and has a little bit of everything that makes these four artists such an intriguing group. It’s a refreshing pop ballad that fills the void left by today’s soulless Top 40 music."
(More Info)

On An On
"The Hunter"
'Give In'
City Slang, 2013
Note: Earmilk says this Chicago band is "Picking up where “Ghosts” left off, ON AN ON return with “The Hunter”, the second single to be lifted from their forthcoming Give In long player. Built around a stuttering, propulsive drumbeat, “The Hunter” quickly swells into a soaring, stadium-sized anthem..."
(More Info)

Raul y Mexia
"Las Escondidas"
'Arriba y Lejos'
Nacional, 2013
Note: And we can always get our world music fix from KCRW, who say, "Raul Y Mexia, sons of legendary Los Tigres del Norte vocalist and bassist Hernan Hernandez, just released their first single “Las Escondidas,” produced by Grammy-nominated producer Toy Selectah. These guys are part of the new generation of American Latinos living a bicultural, bilingual lifestyle, which is reflected in their music, with diverse influences from hip-hop and cumbia, Latin ballads and electronic dance music." They also got a writeup in the NYTimes!
(More Info)

****************************************
@PumpUpThaVolume Music News:
Amex UNSTAGED presents Vampire Weekend directed by Steve Buscemi
I love accidentally stumbling upon the sample sources of my favorite tracks #TangerineDream "Invisible Limits"
Tomorrow is 2nd annual International #JazzDay, a celebration of jazz as "universal music of freedom & creativity."
Happy International Jazz Day! We're celebrating with special guests on-air all day, then @ShakerandVine tonight! #jazzday @IntlJazzDay
The Boards of Canada cypher has been solved: full 'Tomorrow's Harvest' album details this way
If you missed it last night,Neutral Milk Hotel are to reform for a 15th anniversary reunion tour.
Slayer is devastated to inform that their bandmate and brother, Jeff Hanneman, passed away at about 11AM this...
Spider Bite Called 'Pivotal' In @Slayer Guitarist's Death
Frank Alexander, Tupac's Bodyguard Is Dead. Did He Know Too Much?
MGMT ready new song "Something to Do With Prince" for a limited split 7-inch with Spectrum and Spacemen 3
Sigur Rós "will probably strut around the screen yellow color" on the 'Simpsons,' says Google Translate
Watch The Smiths’ Johnny Marr and Andy Rourke reunite on stage, perform “How Soon Is Now?” in Brooklyn last night
RIP #MCA
Love & Respect to the End: Santigold, Danny Brown, and More Remember MCA
One year ago today the world lost my friend and one of my heroes, Adam Yauch aka MCA from Beastie Boys. So much love and respect.
MCA Day: see photos of Ad-Rock & Beastie Boys' biggest (and youngest) fans at the dedication of Adam Yauch Park