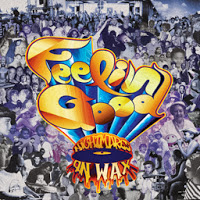 Goldspot
"Abyss"
'Aerogramme'
Mt Hoboken / Nice Music, 2013
Note: "You may not know New York-based multi-culti rockers Goldspot by name — but if you have a television (their songs have been featured on shows like How I Met Your Mother and The OC), a Netflix account (The Dilemma, How Do You Know), or an Apple product (their music was used to help launch the iPad) you’ve probably heard them... the band’s third album, Aerogramme...produced by frontman Siddhartha Khosla and Beach Boys engineer Jeff Peters."
(More Info)

Pink Martini
"July"
'Get Happy'
Heinz, 2013
Note: "Pink Martini, the worldly and sophisticated – and oh yeah, fun – little orchestra from Portland, Ore., might have some listeners scrambling for Rosetta Stone lessons when they hear “Get Happy.” The songs on the new release are in English, German, French, Spanish, Japanese, Turkish, Farsi, Chinese and Romanian. But no need to stress: Despite their differences in tongue, these songs are as digestible as a smooth cocktail because bandleader Thomas Lauderdale finesses the arrangements into a sumptuous collection of music, from frolicsome to steamy. He works with a small army of vocalists, including Storm Large, who joined the act in March of 2011 when China Forbes took time off to have surgery on her vocal cords. Forbes is now back in the fold, and the two-lead-vocalists dynamic suits Pink Martini."
(More Info)

Weekend
"July"
'Jinx'
Slumberland, 2013
Note: We last heard the Weekend (still not to be confused with Canadian MC, Weeknd) on Episode070, now the Brooklyn-via-San Fran band return with more from their sophomore LP 'Jinx'. "When you release a record like Sports, the 2010 debut from San Francisco ex-pats Weekend, the smartest thing you can do is tour the hell out of it. On their second LP, Jinx, Weekend are still working with a strong palette of blacks and grays. But where Sports' only light was the mineral glint of smeared charcoal, Jinx has a reflective, acrylic gloss to it... "July" is a step further in the right direction, managing to capture the balmy freedom of summer's favorite month without alienating what could be the track's core constituency." They mean 'goths'.
(More Info)

Dismemberment Plan
"Daddy Was A Real Good Dancer"
'Uncanney Valley'
Partisan, 2013
Note: "When the Dismemberment Plan called it quits in 2003 after 10 years and four albums, it was one of the biggest bands in Washington. Hundreds braved the inevitable summer thunderstorms for an aborted "final" show at Fort Reno, and then packed the 9:30 Club for an "official" farewell... On "Daddy Was a Real Good Dancer," Morrison sings over a smooth '90s indie-rock track, "Daddy was a real good dancer / Until he had me / And then he threw his dancing shoes away." It's as if the band has -- perish the thought -- grown up."
(More Info)

Brendan Benson
"Swimming"
Ready Made, 2013
Note: "Brendan Benson has been hard at work on a new solo recording due in November. Today's Top Tune is a preview of what we'll hear next from the Nashville-based singer songwriter."
(More Info)

Someone Still Loves You Boris Yeltsin
"Nightwater Girlfriend"
'Fly By Wire'
Polyvinyl, 2013
Note: "And recently a funny thing happened, let’s call it the apotheosis of being named after a historical figure: Someone Still Loves You got a call from the Boris Yeltsin Foundation itself, to fly out to Russia, shake some hands, take home seven expensive bottles of vodka, and perform at both an elementary school and at Old Nu Rock (Russia’s largest winter festival) after our government certified their status as US cultural ambassadors for a day. They made a documentary about the experience, because that was a smart thing to do, and came back newly inspired to make music. The result is the album Fly By Wire, out this fall. Check out...the trailer for their doc Discussions With Russians"
(More Info)

Nightmares on Wax
"Master Plan"
'Feelin' Good'
Warp, 2013
Note: "Though it's been five years since we've heard from veteran sonic adventurer George Evelyn (a.k.a. Nightmares on Wax), the Warp stalwart has returned with plans to release his next full-length album this fall. Entitled Feelin' Good, the 10-track effort is said to be inspired by Evelyn's time spent living in Ibiza and running his weekly Wax Da Jam residency on the island."
(More Info)

Au Revoir Simone
"Crazy"
'Move in Spectrums'
Instant, 2013
Note: "There are three very important things to know about the band Au Revoir Simone. First, their name comes from a line in the Pee-wee Herman movie, Pee-wee’s Big Adventure. Second, they are an all-keyboard band formed after a a long train ride to New York City. Third, David Lynch called the band’s music “innocent, hip and new.” ... “Crazy” is the first single off the band’s latest album. It is a 3-minute pop gem with the sticky hook, “Ooo, you girls, you drive me crazy.”"
(More Info)

SCRNS
"TTYN"
Banter, 2013
Note: "Minneapolis based duo SCRNS, the product of Howler Bassist Max Petrek and ballerina-turned vocalist Erin Ross. Similar to 90's legends Aphex Twin and Jodeci, their aesthetics put a spin on modern pop music and generate a wildly original sound derived from their shared love for Billboard rap, R'n'B and EDM. As experimental as their productions may be, SCRNS style is flawlessly completed with vibrant, teenage vocals posing a distorted pop side. "
(More Info)

Dom La Nena
"Golondrina"
'Golondrina' EP
Six Degrees, 2013
Note: We heard "Buenos Aires" from Dom La Nena back in January, she returns with a new EP featuring a cover of The National's "Start a War". "After earning raves from The New York Times, Wall St Journal, NPR and more for her debut album, Ela, Brazilian born Dom La Nena went back into the studio to self produce a new set of tracks with the intention to record them all solo, using only her cello and her voice, similar to her live performances. The end result is a new EP, Golondrina, which consists of one new original track..."
(More Info)

Ghost Wave
"Here She Comes"
'Ages'
Flying Nun, 2013
Note: "If there’s one lasting rock tradition to come out of New Zealand, it’s the jangly Dunedin sound immortalized on so many Flying Nun records, and 30 years on, the Dunedin spirit remains alive in Ghost Wave... “Here She Comes” feels like a garage rock song, but a smart one at that; one that carefully shows its fuzzy layers piece by piece so that the listener can soak them in one at a time before taking it all in."
(More Info)

****************************************
@PumpUpThaVolume Music News:
Bruce Springsteen thanks fans with a heartfelt cover of Suicide's "Dream Baby Dream"
David Bowie named the best-dressed Briton in history
Locals @Battleme opening up for @Metric at the Roseland! #pdxmusic
The main thing I don't like about #WreckingBall is that it blows its dubstep wad on the first chorus instead of a slow, seductive build...
You're up all night to get what? I must've missed it the first 87 million times you said it... #RadioRadio
For the love of god, please don't #SlowDown the song, it needs to already be over... #RadioRadio
Katy Perry's campy, gay-baiting polka-dot pop was first cooed by '80s new waver Josie Cotton
Album of the week: Stream @RedFang's sludge-pop triumph 'Whales and Leeches'
Today is the 20th anniversary of @thesonicyouth's 'Daydream Nation.' Thurston Moore spoke on his iconic LP
Here's Morrissey's autobiography sung in the style of Morrissey
@SufjanStevens Writes Open Letter To @MileyCyrus: “You’ve Been LYING” http://www.stereogum.com/1519582/sufjan-stevens-writes-open-letter-to-miley-cyrus-youve-been-lying/news/ … Follows singer's @SavagesBand typography lesson
I only went to #CMJ once, back in 2002, but i did get to see @PolySpree @MyMorningJacket #UglyCasanova @SigurRos @ChemBros @Jurassic5 & more
Arcade Fire tricked fans in Brooklyn last night
Here's the #Spotify playlist for #Episode081 - #MasterPlan w/ @NightmaresOnWax @TheDplan @PinkMartiniBand and more... http://spoti.fi/1a2fUPL