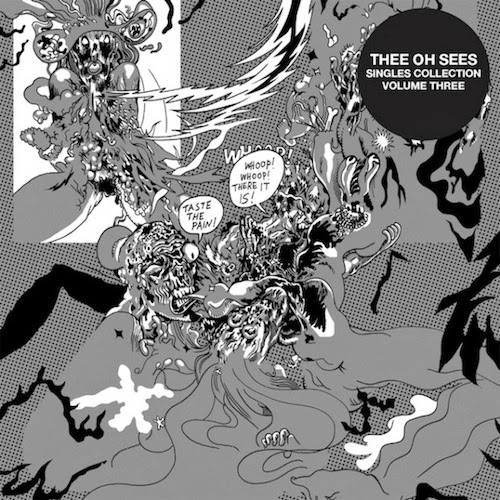 @PumpUpThaVolume: Episode090 – What You Need

"♫Makin' a soundtrack for another planet to hear♫ on Episode090 - What You Need which features brand new sounds from RJD2, Kita Klane, Gerhardts, Wooden Shjips, Thee Oh Sees, Gang Of Youths, We Are Scientists, Beady Eye, Best Coast, Courtney Barnett, Reputante, The Person and The People, Jamestown Revival and Fey Moth...

Previous: Episode089 - We Are Explorers

RJD2
"Love and Go"
'More Is Than Isn't'
RJ's Electrical Connections, 2013
Note: The amazing RJ is back on PUTV with more from his latest joint. "A little more than a decade after Deadringer came out, there's enough music—and enough attempts at reconfiguring his style—to help you construct a picture of how all over the map RJD2's career has been... he largely leaves the vocals to R&B singers who can do his heavy-breaks production justice, like Icebird collaborator Aaron Livingston (“Love and Go”)... the fact that the whole of More Is Than Isn't evokes so many different well-built moods is testament to how much he's been able to elaborate on what he's capable of."
(More Info)

Gerhardts
"Cold"
'Gerhardts' EP
self-released, 2013
Note: "Although they were formed in 2009, the members of Seattle’s Gerhardts have known each other since the late ’90s, taking the musical influences they’ve absorbed throughout their friendship to make a mix of roughly melodic indie rock and second wave emo... Because they’re longtime music fans who know each other’s tastes - the blocky guitars of OK Computer-era Radiohead, shifting dynamics of Sunny Day Real Estate, and the subtly orchestrated pop craftsmanship of the Cure - their chemistry is palpable, both in the strength of their songwriting and their loose, muscular performances"
(More Info)

Wooden Shjips
"Everybody Knows/Ghouls"
'Back To Land'
Thrill Jockey, 2013
Note: No, it's not THAT "Everybody Knows", but there's a double shot of songs! "Back To Land, their newest, bears evidence of a possible recent Neil Young fixation. Since (2011's) West, half of the band moved to Portland, where they recorded this one, and now there’s some lazy acoustic back-porch strumming mixed in with the highway-of-your-dreams reverb-drones. And by discovering their softer side, Wooden Shjips have made the most compulsively listenable album of their career..." Are these guys the sore thumb on Thrill Jockey?
(More Info)

Thee Oh Sees
"What You Need"
'Singles Collection Volume 3'
Castle Face, 2013
Note: No, it's not THAT "What You Need", but it is the fifth(!) time the super-prolific band has been on PUTV. "San Francisco garage heroes Thee Oh Sees are back with another release in 2013 to follow Floating Coffin. This time, it's their third Singles Collection compilation, and it's out November 26 via frontman John Dwyer's label Castle Face. It's got nine tracks from singles and splits, plus two live cuts (one of which is exclusive to the CD edition). Check out "What You Need", originally from the 2011 Castle Face Group Flex book of flexi discs, above. The LP edition is getting three different vinyl color combinations..."
(More Info)

Gang Of Youths
"Evangelists" single
self-released, 2013
Note: "Formed in 2012, the quintet built buzz around Sydney through their demos and fervent live show... Quietly powerful in its catharsis, the band resists the urge to break out into Arcade Fire-style grandeur at the song’s peak, opting for a noisy, shouted final bridge that doesn’t need any lyrics or precision to get its sentiment across." The Aussies will be back in the states next March opening up for fellow PUTVers MR MS!
(More Info)

We Are Scientists
"Dumb Luck"
'Business Casual' EP
Masterswan/Dine Alone, 2013
Note: After four full-lengths, the "We Are Scientists are changing. The band have a new label, and a new appetite for making music - trying all manner of experiments in the process. What comes out will be unexpected... Opening with flailing, proto-metal guitar lines, this is visceral stuff from the New Yorkers. Pounding drums and screeching vocals, We Are Scientists have rarely seemed to alive, so alert."
(More Info)

Beady Eye
"Soon Come Tomorrow"
'BE'
Columbia, 2013
Note: Damn, one of those Gallagher boys snuck onto PUTV! "On their second album, Beady Eye have attempted to do what their old band never could: evolve. When it came to producers, Oasis hired craftsmen, not visionaries, because their comfort zone was exactly where their fans liked having them. Beady Eye, not having that luxury, have turned to TV On The Radio’s Dave Sitek, a sonic maverick who surely numbers among the least likely candidates for the task..."
(More Info)

Best Coast
"I Wanna Know"
'Fade Away' EP
Jewel City, 2013
Note: Sweetness, more new music from Bethany and Bob! And I guess the end of the year is EP time... "As her Best Coast project with Bob Bruno grows in popularity, Bethany Cosentino is becoming quite the songwriter... (“I Wanna Know” is) the cream of the Fade Away crop...is textbook Best Coast - there’s an instantaneously infectious melody, a driving surf rock vibe, and a healthy dose of heartbreak... Like all great Best Coast songs, it’s a place we’ve all been before, but here, Bethany captures the feeling like she never has before, making “I Wanna Know” simultaneously one of the catchiest Best Coast tunes and one of the most emotional."
(More Info)

Courtney Barnett
"Avant Gardener"
'The Double EP: A Sea of Split Peas'
House Anxiety, 2013
Note: More music from Ms. Barnett! "Courtney Barnett makes jangly, rumpled indie-rock in the vein of Pavement or early Dylan: Wordy, wry, and anchored by the kind of poetic clarity you can only get from looking at the world askew. Peas collects EPs released in 2012 and 2013 — an informal introduction to an artist who probably has more to offer. Its music tends to be simple, its narratives more surreal: On the highly quotable "Avant Gardener," an attempt to conquer a lazy day by planting a few seeds devolves into a panic attack, complete with ambulance. "The paramedic thinks I'm clever 'cause I play guitar," Barnett deadpans. "I think she's clever 'cause she stops people from dying." Both have a point."
(More Info)

The Person and The People
"I Was Wrong"
'Big Whoop'
self-released, 2013
Note: Say hello to the MPLS band formerly known as Messenger. "The Person & the People's infectious indie rock is heating up this winter season. The Twin Cities band is set to release their first full-length album Big Whoop, a collection of the smartest and catchiest songs brash enough to snag your attention... "
(More Info)

Jamestown Revival
"California (Cast Iron Soul)"
'The California' EP
Wild Bunch, 2013
Note: "Texas boys Jonathan Clay and Zach Chance make up the Los Angeles based, southern-indie-roots band Jamestown Revival. The duo have just released their fantastic new EP Califorina, a collection of 3 original songs, and one perfect John Prine cover, which would be a perfect accompaniment to laid back night on the porch with a pipe and a bottle of fine whiskey... The second track “California (Cast Iron Soul)” finds the band questioning their new home and wondering what it was that drove them there in the first place as they sing “California/I don’t even know you/And you’ve taken me away from home.”"
(More Info)

Fey Moth
"Inside" single
self-released, 2013
Note: "Seattle’s Fey Moth keeps a low profile. In a time when artists seem to flood the internet and the streets (especially telephone poles!) with promotion and release info, this local trio, led by Piper Drake, seems to believe that less is more... “Inside”, though, is no wallflower of a song... The accompanying music is futuristic but somehow also classically hip-hop infused, with laser sounds and 808 drum beats."
(More Info)

****************************************
@PumpUpThaVolume Music News:
@Those_Darlins Plot #Nashville-Recorded Live Album for 2014
BEYONCÉ Shatters iTunes Store Records With 828,773 Albums Sold in Just Three Days!
Spiritualized (@officialSpzd) to perform Ladies and Gentlemen We Are Floating in Space in full in L.A.
Check out this great Podcast: http://feeds.feedburner.com/pumpupthavolume I can't get enough of @Pumpupthavolume by @mediamonarchy. GET YOU SOME! #Fresh
“@Nightlands: What is your favorite old record that you got into this year?” tangerine dream stratosfear, lansing-dreiden on @MexicanSummer
Song stuck in your head? Google reveals which lyrics were searched for the most this year
Thinking of Blood Orange's @devhynes who lost everything in an apartment fire, including his dog
Sallie Ford and the Sound Outside breaking up after Doug Fir shows http://www.oregonlive.com/music/index.ssf/2013/12/sallie_ford_and_the_sound_outs_8.html … @SallieFordMusic @DougFirLounge #pdx
Is @LanaDelRey's Best Song Oscar bid being sabotaged?
2013 has been a terrific year for New Releases – cheek out our top 10 list here
#ICYMI: Country music legend #RayPrice was 87 http://www.foxnews.com/entertainment/2013/12/16/ray-price-dead-country-music-legend-was-87/ … ▶ Ray Price "#CrazyArms" on Grand Ole Opry http://www.youtube.com/watch?v=I4oFrXx8ogI …
2013: The year of the overhyped album blockbuster
It's official: Courtney Love will stand trial for talking shit on Twitter
At last, Spike Jonze reveals the details of the @beastieboys feature film that never was
Amazon and Target are refusing to sell Beyoncé’s new album
Watch CoS editors discuss the Top 5 Albums of 2013 on tonight's episode of @RockitOutBlog
Nirvana, Peter Gabriel, KISS, and more will be inducted into the Rock And Roll Hall Of Fame
Here are the worst Rock and Roll Hall of Fame snubs
Thee Oh Sees say they aren't breaking up, just taking a "well-deserved break," and plan to release new album in 2014
Pussy Riot's release approved by an angry Putin
Lauryn Hill Reschedules, Adds Upcoming Tour Dates