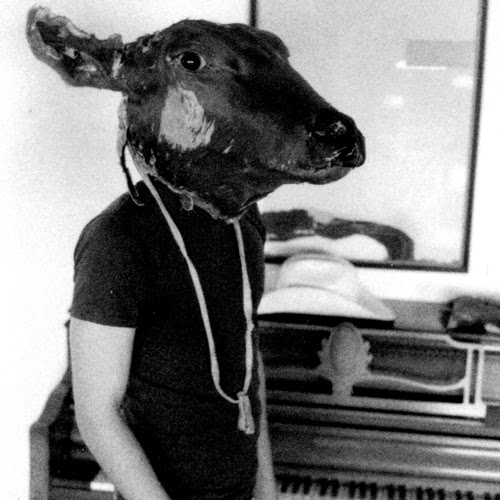 Previous: Episode091 - The Eagle Has Landed

Dengue Fever
"Taxi Dancer"
'Girl From The North' EP
Tuk Tuk, 2013
Note: Let's start 2014 with one of Los Angeles' best Cambodian surf rock six-pieces named after the deadly disease! "Blame it on the ’60s throwback vibe, the stabs of guitar and the distinct tones of the Farfisa organ, but Dengue Fever sound like they’ve come straight out of a spy movie and straight into your earholes... Opening track “Taxi Dancer” is a blur of handclaps and call and response vocals racing down the highway..."
(More Info)

Ex Cops
"Separator"
'True Hallucinations'
Other/Fat Possum, 2013
Note: The Brooklyn duo returns to PUTV with more from their 2013 release. "Acid-trip allusions aside, True Hallucinations is ultimately a triumph of focus and discipline... the vintage 4AD flashback that is "Separator"... beautifully melancholic riff cuts out during the second verse, leaving Harding and Bruun's airy sighs to hang above a brooding bassline, you get a sense of what the Pixies' "Monkey Gone to Heaven" might sound like through the space-bound simian's ears."
(More Info)

Sebastien Grainger
"Waking Up Dead"
'Yours To Discover'
Last Gang/Cooking Vinyl, 2013
Note: "Sebastien Grainger: pop singer. Who would’ve thought? It sounds unlikely, until you carefully revisit the artist’s output up to this point. That reevaluation reveals that Grainger has always been partial to a good hook, whether in his solo output or with Death From Above 1979. It’s just that he tended to bury it under layers of distorted chaos. Of course, those were still rock songs, and though there are a few fist-pumpers on Yours to Discover, Grainger seems much more indebted to the realms of pop, soul, funk, and glam."
(More Info)

Grupo Fantasma
"Cayuco" (Live in KUTX's Studio A1)
Ingrooves, 2013
Note: "Which Austin band has performed with Prince, Spoon, and GZA of Wu-Tang Clan? Grupo Fantasma, of course. The Grammy-winning outfit is nominally lumped into the amorphous “Latin rock” genre, yet Grupo defies easy categorization. As their collaborative streak suggests, the ensemble is comfortable banging out salsa-flavored funk alongside psychedelic cumbias, old school R&B, and a little jazz to keep things swinging. This ever-shifting musicianship is perfect for the live setting, where the band excels. With nine members, Grupo Fantasma can stretch out on songs, laying down a danceable groove while the horn section pops and the guitars sizzle."
(More Info)

Lord Echo
"Digital Haircut"
'Curiosities'
Bastard Jazz, 2013
Note: Last heard a few weeks ago, the NZ phenom comes back with even more. "Back with another extension of his classic creative and seamless sound, Lord Echo has released Curiosities: a ten-track album of intricate instrumentals and audio progression created at the hand of the buzzing New Zealand-based artist. Borrowing beat compositions from across genres such as Funk, Afro-Disco and Latin Boogie, Curiosities is the second project from the artist, offering a whimsical audio journey that stretches from the delicate piano sound of "Ghost Hands" to the slapping bassline in "Digital Haircut.""
(More Info)

Cut Copy
"Let Me Show You Love"
'Free Your Mind'
Modular, 2013
Note: And here's even more music from down under! It's another cut from those sleek Australian sound purveyors. "They did it again. On their fourth LP, Aussie dance-rock idols Cut Copy have created yet another starry-eyed, synth pop universe in which they impeccably blend engaging melodies with good ol’ disco beats that’ll leave listeners in the northern hemisphere craving for summer to return."
(More Info)

Animal Eyes
"Bender"
'Ursus' EP
self-released, 2013
Note: "Alaska-via-Portland quintet Animal Eyes’ joyously turbulent music takes as many stylistic and tonal turns in one four-minute song as many bands do in one album... Throwing any trace of traditional pop structure out within the first twenty seconds, leaving room for the band to run wild. Energetic but not spastic, the song sprints in pop, psych rock, and world music directions - all at the same time."
(More Info)

Shakey Graves
"Word of Mouth" (Live in KUTX's Studio A1)
self-released, 2013
Note: "The singer, songwriter, and one-man band, has been hailed by the likes of NPR Music and The New York Times. He graced the cover of the March 2013 issue of Austin Monthly. His breakthrough 2011 LP Roll the Bones burns with the quiet, intensity of his intimate live performances... we here at KUTX were lucky enough to get our very own concert from Shakey Graves. He stopped by Studio 1A to perform a few tunes including “Word of Mouth.” His picking is delicate and dextrous. The notes dance and bubble under his expressive campfire vocals. When the pace quickens toward the halfway point of the song, you wonder how all this beautiful music is coming from just one dude. But it’s most definitely all him..."
(More Info)

Connan Mockasin
"I'm the Man, that Will Find You"
'Caramel'
Phantasy Sound/Because/Mexican Summer, 2013
Note: "On his new album Caramel, New Zealand’s Connan Mockasin brings a queasy, warped take on ’80s-style soft-rock not too different from the stuff Ariel Pink has been bringing lately... here could not be a better title for Connan Mockasin’s new album. This thing is sweet, smooth, and buttery from start to finish. Mockasin’s psychedelic soft rock shows up in miniature on the early tracks “Do I Make You Feel Shy?” and “I Am The Man That Will Find You,” but gets stretched to absurd lengths in the 15+ minute song cycle “It’s Your Body.”"
(More Info)

Larry Gus
"The Eternal and the Ephemeral"
'Years Not Living'
DFA, 2013
Note: "Larry Gus is not his real name; he started out making drum and bass, and hip hop; and his new album Years Not Living (out now) sounds loosely like something out of the West Coast beat scene. Yet, the Milan-based Greek multi- instrumentalist is presently and perfectly at home on DFA, New York's post-everything dance/rock hub. Adopting his Larry Gus alias from a pun on the Greek term for larynx, Panagiotis Melidis puts his voice through its paces, veering from manly mumbles to androgynous falsettos. "
(More Info)

Milagres
"The Letterbomb"
'Violent Light'
Kill Rock Stars, 2014
Note: "Brooklyn quartet Milagres caught our ear with their 2011 debut Glowing Mouth, a funked-up psych-pop set prone to flights of poetic fancy grounded due to singer Kyle Wilson's bedridden state at the time. But it is motion that informs their forthcoming album Violent Light, due via Kill Rock Stars on February 25 (February 24 via Memphis Industries abroad). The new LP takes its title and themes from Wilson's sojourns to New Mexico in order to visit with his grandfather, a scientist who worked on both the Manhattan Project and the hydrogen bomb. Their discussions about nuclear physics were set to the spiritual and elemental backdrop of the American Southwest... "The Letterbomb" combines a David Bowie-like theatricality with a sprawling prog groove."
(More Info)

Frankie Rose
"Question/Reason"
'Herein Wild'
Fat Possum, 2013
Note: "Although she began her career as a drummer in a string of lo-fi and punk bands, Frankie Rose has used her solo career to shift her musical focus to a more dreamy and layered take on her D.I.Y. roots. First drawing attention outside of Brooklyn for her role as the drummer in Vivian Girls, Dum Dum Girls, and Crystal Stilts, Rose began her solo career in 2009... Bursting with tremulous light, “Question/Reason” is one of the more straightforward tracks on Herein Wild, but that doesn’t make it any less impressive."
(More Info)

Orthy
"E.M.I.L.Y."
'E.M.I.L.Y.' EP
Dither Down, 2014
Note: "Austin band Orthy’s new EP, E.M.I.L.Y., is said to be a “musical missive and testament” to frontman Ian Orth’s wife—I’m always down to help spread messages of love. Watch the swooning title track’s above video, directed by Silent Diane’s Eli Welbourne, featuring a midsection like dumping a shoebox full of old photos on your head. The E.M.I.L.Y. EP comes out January 21st via Dither Down, with an album to follow."
(More Info)

Buffalo Moon
"Machista"
'Machista'
self-released, 2014
Note: The Minneapolis crew has met their Kickstarter goal for the long-awaited new record and, damn, the video for the title track is pretty sweet, too! "You'd never be able to tell that the majority of Buffalo Moon's members are originally from South Dakota (except for lead vocalist Karen Freire, who hails from Ecuador). Their unique hybrid of bossa nova, samba soul, and electropop is perfect for the oncoming winter when you need reminding that summer will, eventually, be back."
(More Info)

Blood Orange
"You're Not Good Enough"
'Cupid Deluxe'
Domino, 2013
Note: Since appearing on PUTV a few weeks ago, Dev Hynes suffered a huge loss as his apartment burned down and he lost EVERYTHING: belongings, master tapes and even his dog. "Blood Orange is one of the most exciting producers around today. Lending his artistic hand to arguably the best single of 2012 - Solange's 'Losing You' - as well as working with the likes of MKS and Sky Ferreira, Devonté Hynes has reinvented himself as a maestro in slick and sexy offerings. Cupid Deluxe is his second album under the Blood Orange alias, following 2011's debut Coastal Grooves, which proved that Hynes had well and truly left the folk-fuelled Lightspeed Champion and noise terror of Test Icicles far behind... The funk-infused bass lines continue with a complimenting wah-wah guitar on 'You're Not Good Enough', channeling a whole-hearted Prince influence without falling into the copy-cat category. The synth introduction that melts into an early Eighties raucous proves Hynes talent for producing beats that are slicker than your average, with the breathy combination of Hynes and Friends' Samantha Urbani vocals stating "I never was in love // you know that you were never good enough" apposing the song's dance floor feel."
(More Info)

Startographers
"All That I Have Now"
self-released, 2013
Note: "Despite the decibels, the band’s songs, which call to mind acts like My Bloody Valentine, have an impressive tunefulness. And through the overdrive and reverb, Startographers have ears for hooks... take a sec to check out “All That I Have Now.” It’s a preview of what you’ll be hearing when they put out a release this spring. The song uses sturdy rock (with some grunge thrown in for good measure) for its bones, but there’s enough room to breathe for gentle atmospherics. The combination makes for a song with all the right hooks."
(More Info)

(Thanks again to KEXP, KCRW, KUTX, The Current, Twilight Circus Dub Sound System and you!)