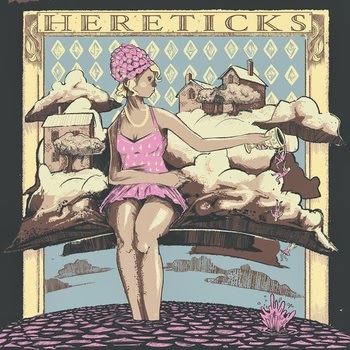 Static Jacks
"Wallflowers"
'In Blue'
Old Friends, 2013
Note: "A couple of years ago, a friend recommended The Static Jacks, introducing it as a strong, solid rock band out of New Jersey. Those adjectives still adorn the façade of the group upon the release of its second effort, In Blue, out on October 1 on Old Friends Records... Notable even among these standout tracks is lead single “Wallflowers,” which struts about like a mid-career Weezer sing-a-long, complete with crooning “oooo”s and a catchy chorus. The song, about accepting the affections of an overeager stalker, is fun and easily digestible — which, for the band, is a big weapon in its hunt for success."
(More Info)

Title Fight
"Be a Toy"
'Spring Songs' EP
Revelation, 2013
Note: "Title Fight are from Kingston, Penn., an erstwhile coalmining town in the northeast part of the Keystone State that uses Wilkes-Barre as its metropolitan reference point. Though its punk scene is vibrant and tight-knit, to the point of being kinda quaint, a band looking to break out on a national level needs an almost pathological level of ambition. Of course, you need great songs as well and Title Fight have plenty of those... “Be A Toy” susses out the musical currency existing between early-90s Merge and mid-90s pop-punk as well as the emotional underpinning—I mean both cohorts were accused of being “slackers," right? And “Be A Toy” finds common ground in a line like “do you regret being used/are you used to it yet?”, trying to get your rocks off while feeling like crap."
(More Info)

Glen Hansard
"Step Out of the Shadows"
'Drive All Night' EP
ANTI-, 2013
Note: He's in The Frames and Swell Season, but here's some solo action... "Glen Hansard, the Irish singer-songwriter who won an Oscar for his work on the 2006 movie "Once," takes a minute - or nine - to pay tribute to one of his major influences on this four-song EP... Pearl Jam's Eddie Vedder, Joe Henry and saxophonist Jake Clemons, nephew of the late Clarence, kindly drop in to help out on [title track "Drive All Night"]... and going a cappella on the intense "Step Out of the Shadows," which actually sounds a lot like a nod to the Boss' boss, Bob Dylan."
(More Info)

Avid Dancer
"Stop Playing With My Heart"
self-released, 2013
Note: Song source KUTX notes, "The U.S. Marine Corps and indie pop seem like they’d be worlds apart, but Jacob Dillan Summers has a boot in both. The L.A. native is a former Marine and world champion in rudimental snare drumming, and he’s translated that into his own music. Summers records under the name Avid Dancer, and he’ll be making his debut on January 21 with a 7″ single." Meanwhile, Spin says, "Avid Dancer is Jacob Summers, a former U.S. Marine and a world champion at the art of rudimental snare drumming. While his first song ever, "Stop Playing With My Heart," certainly sports a steady rhythm, the focus here is on the bigger picture — specifically the way his bright vocals, swirling guitars, and buzzing keys evoke the psychedelic sound of Tame Impala, though somehow sent back to the '60s so all that soulful loveliness can rattle around in the heyday a bit. "You're the only one," Summers sings, "All the others are gone." Of course, if the Los Angeles-based Avid Dancer continues down this promising path, there will be a whole new batch of "others" to come."
(More Info)

Augustines
"Cruel City"
'Augustines'
Votiv/Oxcart, 2014
Note: "The band members formerly known as We Are Augustines moved from Brooklyn to Seattle since their 2011 debut Rise Ye Sunken Ships. "Cruel City," the first track from the now-just Augustines' upcoming self-titled album, bears traces of both hometowns. The scrappy vitality of the Pacific Northwest indie-rock scene meets the type of gruff yet sophisticated rafter-raising you might expect from the National. The group, formed out of the breakup of Brooklyn's Pela, will release its sophomore LP on January 21, 2014, via Votiv/Oxcart."
(More Info)

Places to Hide
"Self Preservation"
'Almost Nothing'
self-released, 2013
Note: "Admirably sloppy and endearingly blunt (sample lyric: “the summer is so hot/and I just want to have sex with you”), Atlanta’s Places To Hide put forth a sometimes brutally honest portrayal of twentysomething malaise in their garage-crafted tunes... Their debut album, Almost Nothing, was released in June 2013, consisting of 10 pop-structured garage tunes that sonically recall strains of ’90s lo-fi and third wave emo."
(More Info)

Hereticks
"Promised Land"
'Hereticks' EP
self-released, 2013
Note: "A heretic is someone that goes their own way, against accepted doctrine or dogma. Hereticks is a tight five-piece from Austin that knows a thing or two about pop music, but isn’t afraid to do their own thang. The band got its start back in 2011... They released their debut full-length Engine in July 2013, and a phenomenal self-titled EP back in October. The EP opens with the gentle “I Only Pretend,” a tune with shades of Yoshimi-era Flaming Lips or early-naughts Shins. But the four-song EP’s tentpole has gotta be “Promised Land.” It’s a track that lives in the sweet spot. The tempo is quick but not fast, just right for head-bobbing. The arrangements are grand but devoid of schmaltz. The playing is virtuosic without being flashy."
(More Info)

TOY
"Endlessly"
'Join The Dots'
Heavenly, 2013
Note: "It has the same sense of momentum as the debut. Songs pound onwards, elliptical guitar lines wrapping round and round, and there's an all encompassing feeling of travelling vast distances. Relentlessly, confidently and quite, quite spectacularly... Fast workers, TOY. Just over a year since their debut and now a second album has arrived... 'Endlessly' is slightly pensive while still driving along on a krautrock rhythm."
(More Info)

The Head and the Heart
"Let's Be Still" (Live on KCRW)
'Let's Be Still'
Sub Pop, 2013
Note: The breakout Seattle sextet gave Episode077 its "Shake" title track and now they're back with an exclusive live version of their latest full-length's title track. Song source KCRW says, "During The Head and the Heart's recent Morning Becomes Eclectic session, the track "Let's Be Still" was a clear standout and we're happy to offer this exclusive live version as Today's Top Tune." Meanwhile, Consequence of Sound notes that, "Throughout the album, The Head and the Heart stress that, although nothing is permanent and life in 21st century America is a hectic blur, we can prolong what’s worth cherishing by taking our foot off the accelerator, if only for a moment. The title cut spells this out explicitly, as the band cautions, “If we don’t slow down soon things might not last.” This plea for recess from a world “spinning a little too fast” conveys a sentiment with which frazzled Millennials can easily identify."
(More Info)

Damien Jurado
"Jericho Road"
'Brothers and Sisters of the Eternal Son'
Secretly Canadian, 2014
Note: Last heard on Episode085/086, the buildup to his eleventh LP (out Jan 21) is becoming palpable. "Damien Jurado’s new album Brothers And Sisters Of The Eternal Son was a powerful enough album to inspire Father John Misty to write a lengthy essay about it and its creator’s brilliance. Now you can finally get an idea of what he was talking about by streaming the new album..."
(More Info)

Flume and Chet Faker
"Drop the Game"
'Lockjaw'
Future Classic, 2013
Note: Song source KCRW says, "Australian electronic artists Flume and Chet Faker have teamed up for the EP, Lockjaw, including this standout track. With Faker's falsetto vocals and superb production, Today's Top Tune has quickly become a KCRW favorite." And Renowned for Sound concurs, "The two Australian musicians first joined forces on Flume’s debut album with the track Left Alone. Now, they’re back with a captivating three-track EP, Lockjaw. Lockjaw begins with Drop the Game; a slow-moving, head-bopping, thump of an electronic anthem. It’s been a long time since I’ve heard a song that’s draws me in so much that I end up playing it on repeat for hours on end, but that’s exactly what happened upon first hearing this track."
(More Info)

Battleme
"Just Weight"
'Future Runs Magnetic'
El Camino, 2014
Note: Well, it finally happened: a friend's band made it on to PUTV! I worked with drummer Zach Richards at the local organic grocery store for a few years and am super stoked and proud of him... "Singer/songwriter Matt Drenik has been making waves in the music industry since 2006 when he began his tenure as frontman of the heavy metal band Lions. In 2009, he decided to expand his musical horizons and created the persona Battleme as a solo creative outlet... Today’s offering, “Just Weight”, opens like a guitar heavy, punk rock ballad, but it swiftly transitions into a more mellow, addictive melody. You can almost feel the way Drenik’s relocation from Texas to Portland has influenced his easygoing and effortless sound."
(More Info)

Buffalo Clover
"Misery"
'Test Your Love'
self-released, 2013
Note: "The band Buffalo Clover call Nashville home, but their 60s and 70s-inspired, soul-inflected roots-rock is as Memphis as it is Music City... In November, Buffalo Clover released their latest record, the Kickstarter-funded Test Your Love. The album has that warm, vintage sound made for vinyl grooves. The band feels loose and laid-back, completely at home with the sound, and Price’s voice has just the right amount of sweet sass. One of the record’s standouts is “Misery,” a slow-burn groover that sounds like The Band recording at Muscle Shoals. Alabama Shakes frontwoman Brittany Howard stopped by the studio when Buffalo Clover recorded Test Your Love. Howard backs up Price on vocals. Their two voices fit together like a handshake."
(More Info)

Strange Names
"Ricochet"
'Common Attraction'
self-released, 2014
Note: Making their third trip to PUTV, it's the MPLS/NYC duo with the strange name. "Much like the previous stuff from the Strange Names oeuvre, this upbeat, clap-along pop track has an undeniable time machine component to it. Recorded locally at the Terrarium with producer Chris Heidman, there's an immediate bounce to "Ricochet" spraying from its vintage drums and bass line."
(More Info)

Golden Gardens
"The Ghost of a Total Stranger"
'Bellflower' EP
self-released, 2013
Note: Last heard on PUTV almost a year ago, the Seattle duo returns with new sounds to send us out. "Golden Gardens seem like they just spent the morning eating a nice piece of cherry pie, drinking a satisfying cup of coffee, and are now interacting with some of the regulars of the Twin Peaks diner. Their Lynchian sound, however, is not contrived – it is, indeed, of a spiritual arena... “The Ghost of a Total Stranger” begins with a bang, setting up instantly the drama, but then the song softens with strings and the feeling of depletion."
(More Info)

****************************************
@PumpUpThaVolume Music News:
Nice vinyl! RT @PumpUpThaVolume: From RCA.. ♫ "I'm Getting Sentimental Over You" by Tommy Dorsey & His Orchestra
Watch: We're a little late to the party, but "MFN" by @CiboMattoCiboMa gives us a line to live our 2014 by.
Check out @common's new track "War"
"The Pride of Slab Fork, #WestVirginia", #BillWithers is nominated for the "Best Historical Album" #Grammy
One of #ChrisWalla's favorite bands...it's Yellow Ostrich! New record #cosmos... ♫ "Ghost" by @yellowostrich
I slipped up and played the same song 2wice on #Episode088 and #Episode092, "You're not good enough" by #BloodOrange. It's hard being OCD...
This was probably the best record of 2013 after all... ♫ "Donny of the Decks" by @FutureoftheLeft
Ani DiFranco's 1995 release Not a Pretty Girl is newly re-mastered for vinyl from the original studio tapes.
From Wild Beasts to Angel Haze, 20 tracks you need to hear this week
The film 'Imperial Dream' scored by @flyinglotus will make it's worldwide premiere at @sundancefest 2014
Insane Clown Posse Defends Fans, With F. B.I. Lawsuit
The #Coachella lineup was just announced! @arcadefire, Outkast, @muse, @myMotorhead, @TheReplacements & a LOT more.
Singing the praises of #AgainstMe! and @LauraJaneGrace's 'Transgender Dysphoria Blues'
Welcome to the #PromisedLand playlist w/ @Battleme @ChetFaker @Hereticks @HeadAndTheHeart and much more...