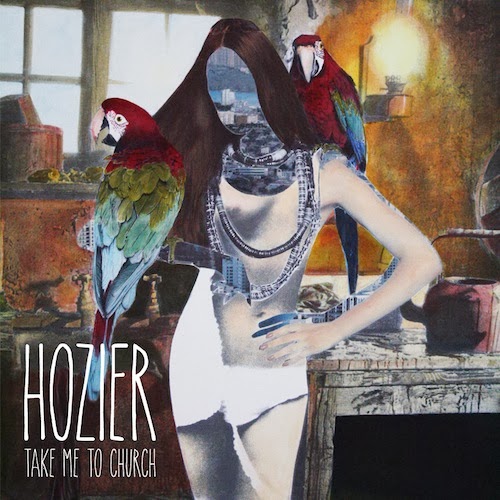 @PumpUpThaVolume: Episode096 – Take Me To Church

James Vincent McMorrow
"Gold"
'Post Tropical'
Vagrant, 2014
Note: We begin with a reinvention as the Irishman's sophomore record dumps the acoustic elements of his 2010 debut to go for the gusto! "James Vincent McMorrow has revealed new track 'Gold' from his upcoming second album Post Tropical. The song...was this week named Zane Lowe's Hottest Record in the World. It's not just industry experts that have been won over by McMorrow's latest offering though - comments posted on Soundcloud in response to the song range from "Absolutely phenonenal" to "Your voice gives me the chills" to the understated, but classic, "Nice.""
(More Info)

Pixies
"Greens & Blues"
'EP2'
Pixies, 2014
Note: More music from the Beantown legends, but this time it's from their newest release! "The mood shifts on the second half of EP-2, traveling to the brighter alternative sound akin to the one Frank Black pursued in his solo career. “Greens and Blues” sounds like it could have been a hit off of Frank Black or Teenager of the Year. Over a warm yet somber acoustic groove, Black sing’s “I’m wasting your time just talking to you - maybe best you go on home.” Amidst it’s bright arrangement, the song carries an emotional burden, and the heaviness will stay in the back of your mind for hours."
(More Info)

James Supercave
"Burn"
self-released, 2013
Note: As song source KCRW notes, this track won't even be on their upcoming EP. They also say that, "James Supercave is an art rock quintet band from LA, repping “Bowie and Morrissey-influenced tunes and dance moves” (BuzzbandsLA)... Look out for their upcoming debut EP “Television,” featuring Joey Waronker (Ultraista, Beck, Atoms for Peace), and produced by Gus Seyffert of The Black Keys."
(More Info)

SKATERS
"Miss Teen Massachusetts"
'MANHATTAN'
Warner Bros., 2014
Note: "New York rockers SKATERS are clearly proud of their hometown, even naming their debut LP MANHATTAN. But just because they bleed for the Empire State, doesn’t mean their heart can’t also beat for the Bay State. In their new single “Miss Teen Massachusetts”, singer Michael Ian Cummings bemoans a girl who couldn’t return his affection, crying out “I guess I’ll never change your mind / but at least you know I tried.” It’s a tale as old as time, really. In fact, with the punchy drums and swinging guitar riffs, it feels like a punked-up version of a ’50s unrequited love song."
(More Info)

Black Hollies
"When It's Time To Come Down"
'Somewhere Between Here and Nowhere'
Ernest Jenning, 2013
Note: "Formed by three members of Rye Coalition, New Jersey’s Black Hollies eschewed most of their former band’s hard rock tendencies in favor of ’60s-style melodies and psychedelia... This new angle has been most fully realized on Somewhere Between Here and Nowhere, the band’s fourth and most recent album, which balances its more ’60s pop leanings with noise - and art-rock tendencies."
(More Info)

Hurray For The Riff Raff
"End Of The Line"
'Small Town Heroes'
ATO, 2014
Note: "How many choruses does it take to turn a party song into an engine causing social change? Is it possible to honor American cultural traditions while dismantling the traps and habits that make them restrictive? Every so often a new voice engages these basic questions in subtle, exciting new ways. Alynda Lee Segarra, the 27-year-old guiding light of the New Orleans-based band Hurray For The Riff Raff, is this year's champion... Small Town Heroes, out February 11 on ATO Records. It is the prolific collective's sixth album and first on a major independent label."
(More Info)

Wild Cub
"Thunder Clatter"
'Youth'
Big Light, 2013
Note: Last heard on Episodes048/069, the band returns as their stock is rising. As Wikipedia points out: ""Thunder Clatter"...received positive reviews on its release in January 2013 but did not chart until it featured in a Bose advertising campaign later that year." Consequence of Sound says, "The songs that resonate do so because of the chants and the shouts, sparkled by [Keegan] DeWitt’s gentle power. Try “Thunder Clatter”, a frenzied composition mixed with the right ingredients for dancing."
(More Info)

Belle Brigade
"Ashes"
'Just Because'
ATO, 2014
Note: "ATO Records has signed The Belle Brigade and will release the band’s new album, Just Because, on February 11, 2014. Barbara and Ethan Gruska – the Los Angeles-based siblings who founded the band recorded the album with engineer/co-producer Shawn Everett. Bram Inscore and Blake Mills, who also performed on The Belle Brigade’s debut album, joined them in the studio and they once again enlisted the mastering talents of the legendary Bob Ludwig."
(More Info)

Gambles
"Angel"
'Trust'
self-released, 2013
Note: "Matthew Daniel Siskin, a.k.a. Gambles, likes words... His straightforward, stripped down folk style, similar to classics like Bob Dylan or Leonard Cohen, awakens his otherwise mysterious collage of words... Upon first listen,”Angel” might sound like another overly sincere love song, but what sets this first track on Trust apart is that you get the sense that Siskin actually knows the person he’s singing to."
(More Info)

Drowners
"Luv, Hold Me Down"
'Between Us Girls' EP
Frenchkiss, 2014
Note: "Drowners, like so many wounded New York City romantics before them, first crossed paths in the downtown bar scene. Singer-guitarist Matt Hitt passed some demos to guitarist Jack Ridley and bassist Erik Snyder, the three formed a band and were soon joined by drummer Lakis Pavlou. The Between Us Girls EP arrived this past February, and Drowners' first full-length album is set for release on January 28, 2014 by way of Frenchkiss Records. In advance of the upcoming self-titled long-player comes "Luv, Hold Me Down," the record's tight, twinkling love note of a first single."
(More Info)

Hospitality
"I Miss Your Bones"
'Trouble'
Merge, 2014
Note: "Brooklyn indie-rock trio Hospitality earned buzz-band status with their peppy 2012 debut, but they navigate darker, more turbulent waters on their follow-up album, Trouble. Fans can get a taste of the album with an exclusive stream of "I Miss Your Bones," a sprawling epic that finds singer Amber Papini mourning everlasting loss with such sad lines as, "All the stars will twinkle in the mist of the sea/ Black and lonely." Behind her, the band builds from a sparse power-pop stomp to a noisy, psychedelic freak-out."
(More Info)

Hozier
"Take Me to Church"
'Take Me to Church' EP
self-released, 2013
Note: "There’s a lot of buzz about Irish singer-songwriter Hozier (born Born Andrew Hozier Byrne), who recently released his Take Me To Church EP as a free download. Hailing from County Wicklow, Hozier’s songs have roots in soul and blues and traditional Irish music. The title song, “Take Me To Church,” is extremely powerful, anchored by Hozier’s confident vocals, the song’s gospel flair, and a tuneful piano line. Sounding a bit like Madman Across the Era Elton John, Hozier’s emotional power is firmly felt in the moving “Take Me To Church.”"
(More Info)

Painted Palms
"Too High"
'Forever'
Polyvinyl, 2014
Note: Last heard on Episode089, the SF psychpop duo returns with more from their debut LP. "A lot more goes into release dates than "seasonal appropriateness," I realize, but Painted Palms' Forever sure doesn't feel like a January record. The long-gestating debut LP from the San Francisco psych-pop duo is a bright, spangling, decidedly summery affair, all radiant harmonies and warm reverberations. Forever's pleasures are simple, breezy, a little like bringing a parka to the pool: you're supposed to dive right in, not waste a lot of time peeling back the layers. Forever is lush, easygoing, 39 balmy minutes in paradise."
(More Info)

Peggy Sue
"Idle"
'Choir of Echoes'
Wichita, 2014
Note: "Despite being in existence for almost 10 years, Brighton trio Peggy Sue – formerly known under the rather clumsy full name Peggy Sue And The Pirates – have never quite managed to break through into the mainstream consciousness... However, almost three years on from their well-received second album, Acrobats, Peggy Sue’s new record is set to change that." They also busted out a soundtrack and a tour with Mumford & Suns.
(More Info)

Benjamin Verdoes
"Unknown Fears"
'The Evil Eye'
Brick Lane, 2014
Note: "He used to lead Mt. St. Helens Vietnam band and now plays in Seattle duo Iska Dhaaf, but Benjamin Verdoes also recently released a solo album, which, as it would happen, he’s been working on even before he co-founded the group."
(More Info)

****************************************
@PumpUpThaVolume Music News:
I rated @prefuse73 at Holocene ★★★½ via Bandsintown
All @TheGRAMMYs winners: @macklemore, Daft Punk, @rihanna, @jtimberlake, and more
#Grammys Laud Giants and Upstarts
fuck you @trent_reznor grammys never even mentioned @poguesofficial Phil Chevron in RIP list & all you can do is whine about being bumped.
#HolyHexes @KatyPerry's '#DarkHorse' #Grammy Performance Had #Witchcraft, Satanic Symbolism
Lana Del Rey's creepy version of Once Upon A Dream for Angelina Jolie's new movie Maleficent is our new jam
Lana Del Rey's Creepy 'Once Upon A Dream' Highlights New 'Maleficent' Trailer
@NineInchNails Parody 'This Is a @Trent_Reznor Song' Is Uncomfortably Dead-On http://www.spin.com/articles/nine-inch-nails-trent-reznor-parody-stream/ … Will he tweet "fuck you"?
#PeteSeeger, famed folksong crooner and writer, dead at 94 http://www.nydailynews.com/entertainment/music-arts/pete-seeger-famed-folksong-crooner-writer-dead-94-article-1.1593663 … "What Did You Learn In School?"
“@DeathAndTaxes: @AgesandAges release video for the impossibly catchy 'Divisionary' http://bit.ly/1fk64eF ” They do a stunning live version
How Daft Punk saved pop music (and doomed us all)
It's true! @slowdiveband officially confirm reunion; reveal first live appearance since 1995
Films by and/or about Nick Cave, Belle & Sebastian's Stuart Murdoch win Sundance awards
Also playing @Primavera_Sound: QOTSA, Sky Ferreira, Godspeed, Darkside, Cut Copy, Television, Blood Orange, more
I see headline "Motley Crue Signs Death Pact" and I don't even bother clicking cuz there's no way the story will be as good as I imagine it.
Idiotic Campaign to Exile Justin Bieber Will Now Waste Your Tax Dollars
With a @widmer_brothers hefe at the @jacklondonbar on a finally Friday night... ♫ "Flower" by @thelittleidiot
The NYC intersection petitioned to be renamed 'Beastie Boys Square' won't happen for at least five years
Alone Yet Not Alone: Oscars scandal as best song nominee is disqualified
Oh yeah, I also exchanged hellos with @parmalee yesterday as they passed my cubicle...
@ATR_official @930Club We love you! Thanks for never stopping... Now I have to listen to "Not Your Business"
Young, Loud, and Snotty: @GreenDay's 'Dookie' turns 20 today