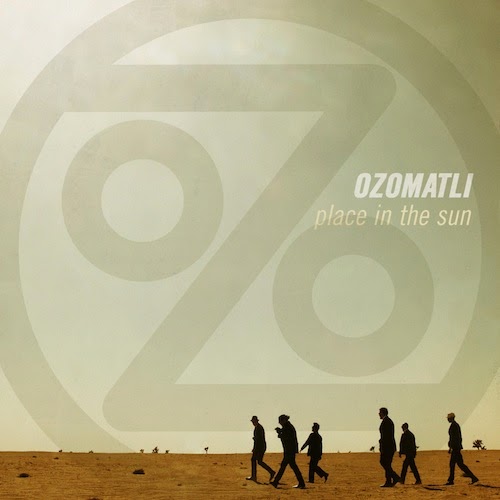 Black Lips
"Boys in the Wood"
'Underneath the Rainbow'
Vice, 2014
Note: "How do you talk about maturity when referring to perpetual punk brats like Black Lips? Though it took them three years to release their latest and seventh LP, fortunately we don’t have to. While Underneath the Rainbow collects their best sounding work to date, thanks to production help from Dap-Kings music director Tommy Brenneck, The Black Keys’ Patrick Carney and their own long-time collaborator, Ed Rawls, the Georgia group, running 15 years now, hasn’t softened a bit... “Boys in the Wood”, for instance, from the album’s first single, are definitely up to no good -- drinking whiskey, making moonshine, and stealing cars."
(More Info)

Katie Herzig
"Summer"
'Walk Through Walls'
Marion-Lorraine, 2014
Note: "Recorded in her home base of Nashville, TN...[with] the same team to work with Herzig on 2011’s critically and commercially successful album The Waking Sleep. Herzig has already announced a big US headlining tour in support of the new album that kicks off in March at this year’s SXSW..."
(More Info)

Bombay Bicycle Club
"Luna"
'So Long, See You Tomorrow'
Island, 2014
Note: We heard "Carry Me" back on Episode097, now let's get more from the UK quartet. "In their nearly 10 years of existence, London four-piece Bombay Bicycle Club has undergone numerous self-imposed sea changes in their musical output... “Luna” is the album’s high point, figuratively and melodically speaking, with a chorus that elevates into sublime levels thanks in part to backup singers Rae Morris and Lucy Rose and co-producer Ben H. Allen, who has worked with fellow rave-minded acts Animal Collective and Cut Copy."
(More Info)

Public Service Broadcasting
"Spitfire/ROYGBIV"
'Inform-Educate-Entertain'
Redeye, 2013
Note: Now this is my kind of jam! These guys are news to me so I'm happy to rock a double shot... "Not to be confused with the Public Broadcasting Service, the British duo makes music using clips from old British government propaganda and information films as narratives for songs engineered to inspire dancing and general chaos... the duo explores the past as it looks into the future, with music meant for clubs that doesn't fit neatly into some EDM subgenre or nightlife cliche. It doesn't force you to dance; it isn't incessant so much as bouncy. it's more Kraftwerk than Disclosure, reminiscent of The Books in its detailed crafting of collages from found sounds." I first thought of The Books, as well...
(More Info)

Vertical Scratchers
"These Plains"
'Daughter Of Everything'
Merge, 2014
Note: "Vertical Scratchers is the new duo of John Schmersal, formerly of Braniac and Enon, and the ex-Triclops! drummer Christian Beaulieu. Considering that these two both come from the skronkier wing of indie rock, it shouldn’t be surprising that they make a tangled, jangled racket together, but they do so with a serious sense of melody. Merge has signed the duo, and they’ll release their debut album Daughter Of Everything early next year. Below, listen to the 97-second psych-pop sprint “These Plains.”"
(More Info)

Kelis
"Jerk Ribs"
'Food'
Ninja Tune, 2014
Note: I was introduced to Kelis' music back on that original, first N*E*R*D* album. "R&B provocateur/future Cooking Channel host Kelis will release her new album Food, produced by TV on the Radio's Dave Sitek, on April 22 via Ninja Tune." She calls her sixth album "a kind of unspoken love fest" between her and Sitek.
(More Info)

Kenna
"Love Is Still Alive"
'Land 2 Air Chronicles II: Imitation Is Suicide - Chapter Two' EP
Dim Mak, 2013
Note: "[T]he second chapter of Land 2 Air Chronicles: Imitation is Suicide, an EP trilogy based around Ralph Waldo Emerson’s classic philosophical essay, Self Reliance. The concept may sound a little dry on paper but, rest assured, the project will pack all the funky electronic grooves and memorable melodies we’e come to expect... Kenna handles both production and vocals on this ‘80s-informed jam, cooking up a driving synth groove to accompany him as he rhapsodizes about the romantic spark between himself and a certain woman... Chapter 1, produced entirely by Chad Hugo of Neptunes, is available now online, and the RJD2-produced final installment is [out now]."
(More Info)

Ozomatli
"Ready to Go"
'Place In The Sun'
Vanguard, 2014
Note: "The multi-genre, multi-talented Ozomatli comes full circle with the release of PLACE IN THE SUN, their new album available on March 11, 2014. The album marks their debut on Vanguard Records. Produced by the band and longtime friend, world renowned engineer Robert Carranza (Eels, Jack Johnson, The Mars Volta) and featuring collaborations with legendary rocker Dave Stewart (ex-Eurythmics)... And after nearly twenty years of working together, touring on every continent, performing before hundreds of thousands, earning international acclaim, and winning multiple Grammys along the way – Ozomatli have earned their right to shine." This is their seventh(?) studio album and the last one was a kid's record? Either way, I definitely remember spinning 2001's 'Embrace The Chaos' back at WSHC.
(More Info)

Walker Lukens
"Lover" (Live on KUTX)
'Devoted'
WhiteLabBlacklab, 2013
Note: "Austin’s Walker Lukens is a big fan of folk music, but with the recent success of bands like Mumford & Sons and the Lumineers, he felt like the sound had become over-saturated. So he decided to experiment with the form: Lukens bought a looping pedal and started created his songs from the ground up, sampling his voice and guitar in interesting ways while keeping the inherent melody intact. He also hired a band (the Side Arms) to flesh out these experimentations in the live setting. These two directions–folk and electronic, acoustic and rock-and-roll–came together on Lukens’s 2013 breakout, Devoted. There’s a reason why he’s capturing attention not just in Austin but nationwide, from NPR to American Songwriter and Billboard." And, of course, he's kickin' it at SXSW right now, too...
(More Info)

Web of Sunsets
"Wildflowers"
'Room of Monsters'
End of Time, 2014
Note: "Room of Monsters offers up a listen that seems to sit well with the climactic occurrences, sitting between the cold nostalgia of winter and the warmth of a Spring afternoon. This particular song has this dreamy quality, while still holding onto a certain sense of traditional Americana…it’s perfect for those days laying in your hammock while your mind wanders." This is the Minneap trio's third appearance on PUTV.
(More Info)

Saint Rich
"Officer"
'Beyond The Drone'
Merge, 2013
Note: Making their second appearance on PUTV, the north Jersey duo is back with more from their Merge debut - whose title could reference killer robots or beautiful ambient. "Saint Rich, the side project of Delicate Steve bandmates Christian Peslak and Steve Marion, debuts with force on Beyond the Drone... Saint Rich sounds like Phosphorescent with an obsession with glam or Foxygen with a spine... On “Officer,” Peslak playfully teases a police officer. “You should be happy and you should feel good to be king of the neighborhood,” he jabs before strutting into the flamboyant chorus. Peslak’s coy vocals lend the right amount of sarcasm without crossing the line into overly theatrical."
(More Info)

Drive-By Truckers
"Pauline Hawkins"
'English Oceans'
ATO, 2014
Note: "The ringer on this stripped-down rock set is guitarist Mike Cooley. Instead of his standard two to four tunes per album, Cooley wrote six out of 13 here – and batted 1.000, moving successfully from bashed-out pop ("Shit Shots Count") to bar-Byrds heartbreakers ("Primer Coat") and honky-tonk piano blues ("Natural Light") that can barely keep on its stool. Much respect, of course, to frontman Patterson Hood, who cranks out his usual smart set of rockers as consistent as Waffle House hash browns. Cooley's burst of creativity has only made Hood better: "Pauline Hawkins" soars, and album closer "Grand Canyon" might be the best, and simplest, ballad he's ever written." Frontman Patterson is the son of Muscle Shoals bass player David Hood and this is the long-running Georgia band's tenth studio album.
(More Info)

Shake Some Action!
"Wait For The Summer"
'Catch The Sun'
Satellite 451, 2014
Note: It's the second time Seattle's SSA! has closed out a PUTV! "Named for the Flamin’ Groovies’ quintessential pop anthem, Shake Some Action! are keeping the power pop tradition alive one major chord at a time. Led by Australia-born singer/guitarist James Hall, the band has been a Seattle mainstay since 2007, when they released their self-titled debut album... Although the band remains rooted in classic pop melodies, Catch The Sun, the band’s fifth album, incorporates more toward hazy kaleidoscopic pop tones... t’s clear that “Waiting For The Sun” more than aptly serves as a glimmer of hope for those of us who are still trudging through winter."
(More Info)