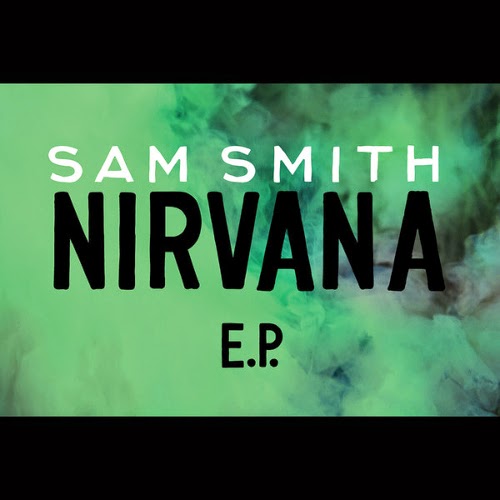 ****************************************
♬Liner Notes♬: It’s just plain providence that we get to call this week’s episode “Nirvana”. It was twenty years ago that we lost Kurt Cobain and the whole world’s been looking for a reason and a replacement ever since. We can only wonder what we’d all be like if it didn’t go down that way, but it did. Let’s just wonder what the hell he’d think about today’s new music from Sam Smith, Thievery Corporation, Young Fathers – and three, that’s right three new supergroups! “C’mon people now, smile on your brother” – and let’s reach “Nirvana”!

Young Fathers
“Get Up”
‘Dead’
Anticon, 2014
Note: “The opening line of “Get Up” – ”Got no past no future/Fumbling through the ether” – is about as good as an introduction there is to the Scottish hip hop group Young Fathers… “Get Up” is one of the more immediate tracks on [debut full-length] Dead, pushing the trio’s shadowy production into an uptempo pulse while keeping the dissonant flourishes that color the rest of their catalog.” We last heard the Scottish trio back on Episode050.
(More Info)

Mac DeMarco
“Passing Out Pieces”
‘Salad Days’
Captured Tracks, 2014
Note: Let’s say hello to Mac DeMarco, “a Canadian musician born in Duncan, British Columbia. Formerly recording as Makeout Videotape, he has produced three solo albums, Rock and Roll Night Club, 2, and Salad Days.” ““Passing Out Pieces” sounds like DeMarco finally acknowledging his predilection for the wrong crowd, contrasting a bit of self-reckoning with that omnipresent, gap-tooted smile… It’s a guy who sounds like he’s about to share his darkest secrets and then orders another round of shots.” Here’s a longer review from Spin.
(More Info)

Löwin
“Heave Ho”
self-released, 2014
Note: Originally a member of The Couch, Sara Houser is breaking out on her own. “The Couch turned into Otis The Destroyer, while Houser recruited some friends for Löwin. The name is German for “lioness,” but Houser sticks to a Texan pronunciation of “Low-in.” The band’s debut single, “Heave Ho,” is hot off the presses, just in time for Löwin’s own live debut on Sunday, April 6. They’ll open up for Otis The Detroyer… Löwin still shares musical DNA with Houser’s former outfit, and the hard-charging “Heave Ho” is the perfect example. It will have to tide you over until Löwin drops its debut EP this summer.“
(More Info)

Sam Smith
“Nirvana”
‘Nirvana EP’
PMR, 2013
Note: Sam Smith has been so on-the-edge of blowing up for awhile now that I thought we already gave him a spin here on PUTV – but we hadn’t! “Sam Smith is a 22-year-old British singer blessed with golden pipes and cursed with chronic melancholy… He just happens to be able to express joy well. “Nirvana” is a refreshing exhale buoyed by a momentous chorus.” You may also have seen him performing on that over-rated live comedy show last weekend with Louis C.K., too…
(More Info)

Spanish Gold
“Out on the Street”
‘South of Nowhere’
BMG/Del Mar, 2014
Note: “It may be trite to define a tune as “genre-bending,” but every once in a while, you come across the real deal. Such is the case with Spanish Gold’s “Out on the Street,” a heady number that slinks along like Rockwell’s “Somebody’s Watching Me,” trading in synth-goofiness for tight bursts of Black Keys guitar. Spanish Gold consists of My Morning Jacket drummer Patrick Hallahan, ex-Grupo Fantasma guitarist Adrian Quesada and guitarist/vocalist Dante Schwebel of Hacienda… the group self-produced the release with the help of Collin Dupuis (Jeff the Brotherhood, Bombino).“
(More Info)

Split Single
“Waiting For The Sun”
‘Fragmented World’
Inside Outside, 2014
Note: “Following a break from playing in [Bob] Mould’s band, [Jason] Narducy put together a bunch of original songs that he had been kicking around. He then called two of his closest friends in the music world–Britt Daniel (Spoon, Divine Fits) and Jon Wurster (the Mountain Goats, Superchunk)–to flesh out the sound. The team-up is billed as Split Single, and Narducy approached their debut, Fragmented World, more like a fun weekend recording project than an actual band… “Waiting For The Sun” kicks the record off with moody intensity, building a small orchestra in the verses before exploding into catharsis on the chorus. Side projects are a great way to hear musicians let their hair down a bit, but Split Single is more than that: it’s a great introduction to a veteran underground hero.“
(More Info)

The Both
“No Sir”
‘The Both’
Super Ego, 2014
Note: “Aimee Mann and Ted Leo’s friendship began years ago, but they truly bonded over a misspelled hashtag on Twitter: “#dumbie.” The back-and-forth between the two eventually led them to tour together in 2012. Mann said it was Leo’s solo sets that opened up Mann’s interest of collaborating… “Honestly, I feel like for the first time, I’m part of a rock band,” Mann said about the collaboration.“
(More Info)

East India Youth
“Heaven, How Long”
‘Total Strife Forever’
Stolen Recordings/PIAS, 2014
Note: “Previously the lead singer of folksters Doyle and The Fourfathers, [East India Youth’s William] Doyle found himself repeatedly abandoning his acoustic guitar for his laptop compositions, which ended up becoming his main outlet not long after his group’s dissolution… his admirers include Brian Eno and The Quietus editor John Doran, who started a record label for the express purpose of releasing Doyle’s…album that alternates between brooding laments and minimalist, Reich-esque instrumentals to convey its full-blooded take on loss. At the center of that album is “Heaven, How Long”, a six-minute melancholic swell that showcases Doyle’s talent for toeing the line between being robotic and human, anthemic and insular, hopeful and hopeless.“
(More Info)

Stepdad
“Running (Does That Mean You Care?)”
‘Strange Tonight’ EP
Quite Scientific, 2014
Note: “Stepdad formed in the summer of 2009 in Chicago when roommates Ryan McCarthy and ultramark began working on electro-pop recordings in their apartment… The group self-released their first EP Ordinaire digitally, and toured regionally in support of the release. Support slots for more established bands like Passion Pit and Fitz & the Tantrums helped bring Stepdad to the attention of more fans.“
(More Info)

Thievery Corporation
“Depth of My Soul” (w/ Shana Halligan)
‘Saudade’
ESL, 2014
Note: “Thievery Corporation’s Eric Hilton and Rob Garza offer a vibey, transfixingly contemporary take on saudade with Saudade (pronounced by Brazilians as “sow-DAH-djee”), their seventh full-length album. Since 1996’s Songs From the Thievery Hi-Fi, which was dedicated to composer Antonio Carlos Jobim, Thievery has explored every square foot of the intersection where bossa nova and electronic sample manipulation meet.” Does this sound like Lana Del Rey? No, Cassie says it’s more like Portishead…
(More Info)

Tycho
“Awake”
‘Awake’
Ghostly, 2014
Note: “For nearly a decade, Tycho has been known as the musical alias of Scott Hansen, but with the release of Awake – his second LP for Ghostly International – the solo project has evolved into a three-piece band. Relating closer to post-rock than ambient soundscapes, the record is situated in the present, sounding more like Hansen than drawing from his influences. “This is, in many ways, the first true Tycho record.”… [The SF-based producer is] Also known for his design work as ISO50, Hansen’s visual and sonic efforts have dovetailed throughout the course of his career.“
(More Info)

Peach Kings
“Be Around”
‘Mojo Thunder’ EP
self-released, 2014
Note: We heard from the Peach Kings way back on Episode034 in November 2012! “When Paige Wood and Steven Dies initially met in San Francisco a few years ago, they had no idea how deep their connection would go… Now based in L.A., the Peach Kings are readying their new EP, Mojo Thunder, out June 3. The duo work together in their practice space, slowly building songs around scraps of guitar riffs that Dies writes. On “Be Around,” you can hear hip-hop as a major influence. The song unfolds with a hypnotic groove, marrying heavy beats with Dies’ bluesy guitar style and Wood’s fiery performance.” And we thank them for the retweet love!
(More Info)

This week’s b-sides: St. Vincent, Hurray For The Riff Raff, FAMY, Kaiser Chiefs, Stone Jack Jones, KINS, And The Professors and Leopold And His Fiction

****************************************
@PumpUpThaVolume Music News:
The “Godfather of House” Frankie Knuckles has passed away
Video Rewind: Beastie Boys end six-year hiatus with gripping performance on Letterman in 2004
Slipknot tragically linked to the Fort Hood shooter
Johnny Rotten will star in ‘Jesus Christ Superstar’
The fascinating tale of Hong Kong’s best record collection
The War on Drugs and Destroyer join the lineup for @Pickathon Music Festival 2014
The flying saucer landed at the 9:30 club! kraftwerk #kraftwerk930
MT @pitchforkmedia: @MIAuniverse and @JanelleMonae perform “Bad Girls” and “Q.U.E.E.N.” together… as holograms
THERE IS NO OTHER TIME is top-40, with your help we can move it up and well and truly KLAX the charts. LET’S DO IT
Download a collection of singles from Those Darlins
Billy Corgan: new @SmashingPumpkin song “Tiberius” includes an “epic wizard part”
Glastonbury announces its lineup
Jack White, @Skrillex, @Pixies, and @RobertPlant will join @arcadefire and many more at @GlastoFest 2014
Jack White announces new solo album, Lazaretto
Jack White will record and release “Lazaretto” in one day — can @thirdmanrecords make the World’s Fastest Record?
Check out the artwork for Michael Jackson’s first posthumous album
Nirvana’s Dave Grohl and Krist Novoselic, Nas, Q-Tip, Stevie Nicks, Kiss, more will appear on @FallonTonight
In this 1995 piece, @DavidBowieReal, @IggyPop, Joey Ramone, and many more remember Kurt Cobain and @Nirvana
Foo Fighters pay tribute to Kurt Cobain

(Thanks again to @KEXP, @KCRW, @KUTX, @TheKeyXPN,@TheCurrent, @TwilightCircus1 and you!)