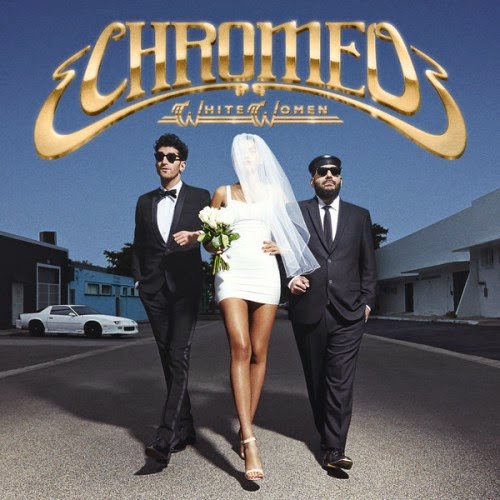 Previous: Episode112 - Simple And Sure

Chromeo
"Frequent Flyer"
'White Women'
Last Gang, 2014
Notes: "Chromeo's fourth album has everything from smooth Chic guitar joints to flourishes of Euro hi-NRG and modern dance pop so shiny it could have been produced by Dr. Luke. The Canadian duo's disco revival isn't quite as cheeky as similar efforts from, say, Duck Sauce (co-founded by Chromeo singer Dave 1's little brother A-Trak) – but songs like "Sexy Socialite" are clearly meant as clever fun all the same. Your enjoyment may hinge on whether you hear Dave 1's lines as those of a con man trying to persuade you to like him or an endearingly nervous wreck terrified that you don't." We featured this as an #AlbumOfTheDay this week and I love listening to it - it's cheeky, funk pop mastery!
(@Chromeo)

Little Dragon
"Pretty Girls"
'Nabuma Rubberband'
Because, 2014
Notes: "A rubber band is the perfect picture to fit Swedish electronic outfit Little Dragon. Up to this point, the band has been carving a unique sound that occupies a haunting modern space somewhere between historical influences like Massive Attack and Bjork... Little Dragon’s fourth LP is an unusually organic monster, less of a singular snapshot of the band, and more like a motion capture taken in a darkly lit room. On Nabuma Rubberband, there’s no motif to catch on to and dissect to infinity. Rather, it’s like a beautiful, elusive creature you get to watch for only a moment before it disappears into the dark again." Another #AlbumOfTheDay entry, this new full-length is definitely a slower sound from the Swedish sonic explorers.
(@LittleDragon)

Yann Tiersen
"A Midsummer Evening" (Radio Edit)
'∞ (Infinity)'
Mute, 2014
Notes: "The French composer Yann Tiersen has fused rock and classical (or “new”) music since he arrived nearly full-formed in 1995, predating indie rock’s obsession with composerly fare by almost a decade. And his soundtrack to the 2001 film Amelie was probably one of the first that young indie-loving English majors from Florida to Oregon purchased of their own accord... on Infinity, Tiersen’s eighth album, one senses the composer’s subtle attempt to reclaim some of the ground taken by string-heavy behemoths like [Sufjan] Stevens and his contemporaries in the past decade." And I like the Polyphonic Spree sound I hear, too...
(@YannTiersen)

Black And White Years
"Embraces" (Live on KUTX)
'Strange Figurines'
Modern Outsider, 2013
Notes: "Having the Talking Heads’ Jerry Harrison produce their [2008] debut album has been both a blessing and a burden for the Black And White Years... For album number three, the band sought to combine the quirky pop of their early years with the brash electricity of their live shows. Strange Figurines finds the Black And White Years exploring this territory in an exciting way. They stopped by Studio 1A earlier this year to show off the new album, and today’s song of the day comes from this live session. “Embraces” is delightfully off-kilter, mixing synths and loops with a throwback disco beat–vintage and modern, all at once." Just one of our Austin band's featured this week by KUTX and playing the X Games this weekend...
(@BlackWhiteYears)

Secret Sisters
"The Pocket Knife"
'Put Your Needle Down'
Republic, 2014
Notes: "If the 2010 self-titled debut from the Secret Sisters proved that siblings Laura and Lydia Rogers could find success with something traditional, its follow-up, Put Your Needle Down, shows that they aren’t going to stay in anyone else’s shadow... A heavier version of P.J. Harvey’s “The Pocket Knife” is a perfect fit for this album, keeping in line with the scornful, searing original material."
(@TheSecretSister)

Little Radar
"Coming Clean"
'Souvenirs'
self-released, 2014
Notes: "As far as first tours go, Little Radar’s was certainly memorable. The quartet set out from their Austin home base in 2012, only to arrive in New York two days after Hurricane Sandy... Their travels also took them to Nashville’s Sputnik Sound, where they met Grammy-award winning producer Mitch Dane and decided to turn the recording keys over to him. Altogether, it was a pretty fruitful trip – the band’s third release, last year’s Souvenirs, reflects the whirlwind aspect of that initial tour... Souvenirs standout “Coming Clean” rushes headlong over a pounding rhythm section before screeching into a half-time chorus. The effect is similar to a runaway train, chugging away with power and momentum." Another Austin band playing the X Games this weekend...
(@LittleRadar)

Lee Bains III & The Glory Fires
"The Company Man"
'Dereconstructed'
Sub Pop, 2014
Notes: "Just because you’re about to dive into examining the social and cultural implications one of the United States’ most contentious periods doesn’t mean you can’t do it while kicking out rowdy Southern rock tunes with the amps up to 11 – just ask Birmingham’s Lee Bains III & The Glory Fires... His sophomore outing, last month’s Dereconstructed, is an even louder, deeper look into Bains’, and the American South’s, history that touches on plenty touchy subjects with a lyrical depth that belies Bains’ hand grenade guitar... "
(@TheGloryFires)

Alice Boman
"Be Mine"
'EP II'
Control Group, 2014
Notes: "Alice Bowman, a young Swedish singer with a powerfully delicate voice - a voice that knows it’s been broken, but that only shows signs of this history cautiously. She sounds like a mother singing a lullaby, like someone weeping up the street, like the hour of midnight struck in your living room. “Hold me close / I don’t ask for more”, Boman sings on today’s featured song, “Be Mine”. Listening to the track, there is a comfort that encircles. It reminds of the joy of knowing that there are great songwriters in the world that many haven’t yet heard of."
(@AliceBoman)

Denney and the Jets
"Water to Wine"
'Mexican Coke'
Burger, 2014
Notes: "Chris Denney, main man for Denney & the Jets, seemed to have lived hard young, as stories from the band’s debut, Mexican Coke, feel both young and weary. Denney recorded the album in five days, and the quick turnaround gives these dusty tracks a vibrant life... they’ve got a solid debut to build on."
(@DenneyAndTheJets)

Old 97's
"Let's Get Drunk & Get It On"
'Most Messed Up'
ATO, 2014
Notes: "On this most Old 97's-ish of Old 97's LPs, the hard-partying twang-punk quartet throw a 20th-birthday bash for themselves. In the tradition of boozy anniversaries, it begins with a victory speech: "Longer Than You've Been Alive" pays tribute to "20 good years of about 25," confessing, "Our jobs are all jobs/And sometimes they suck." Then it's yet another round of airtight songs celebrating life-as-sublime-train-wreck amid music that conjures the British Invasion landing in a Texas barroom. Special guest Tommy Stinson adds a shot of Replacements-style chaos to the mix, notably on "Let's Get Drunk & Get It On" – a balls-out anthem that sums up the 97's religion perfectly." It's the tenth studio record from the boys and I'm glad to add them to the PUTV roster!
(@Old97s)

PHOX
"1936"
'PHOX'
Partisan, 2014
Notes: " After releasing the sunny, charming Confetti EP last summer and signing to Partisan Records, the Wisconsin six-piece PHOX has been working on their self-titled debut, which is due out June 24. Now, they've shared a new song titled "1936."...the official tracklist, upcoming tour dates..." Making their third appearance is one of 2014's buzziest bands...
(@PHOXband)

My Jerusalem
"Born In The Belly" (Live on KUTX)
'Preacher'
The End, 2012
Notes: "[Austin's] My Jerusalem is one of those bands you must listen to in the darkest hours, their music depending on the dropping away of the sun for it to spread out and breathe. Like Morphine or Murder By Death... the pummeling firestorm of “Born in the Belly”" Like all of KUTX's song this week, they're all rocking the X Games in Austin this weekend...
(@MyJerusalem)

Kid Smpl
"Ja"
'Silo Tear' EP
Hush Hush, 2014
Notes: "It’s amazing just how much Joey Butler, a.k.a. Kid Smpl, has already done at the early age of 23. He’s signed a deal with Hush Hush Records, run by KEXP’s own DJ Alex Ruder. He’s crafted, recorded, and produced three EPs and three collections of remixes of not only his own music but also those of more popular artists... “Ja,” today’s featured song, momentarily delves into the territory of dubstep, but never does Kid Smpl stay there. He crosses genres in his creative process, blending elements of hip-hop, new age, ambient, and R&B. Scattered throughout the piece, there is chilling white-noise, heavy distortion, and an entrancing synth dalliances."
(@KidSmpl)