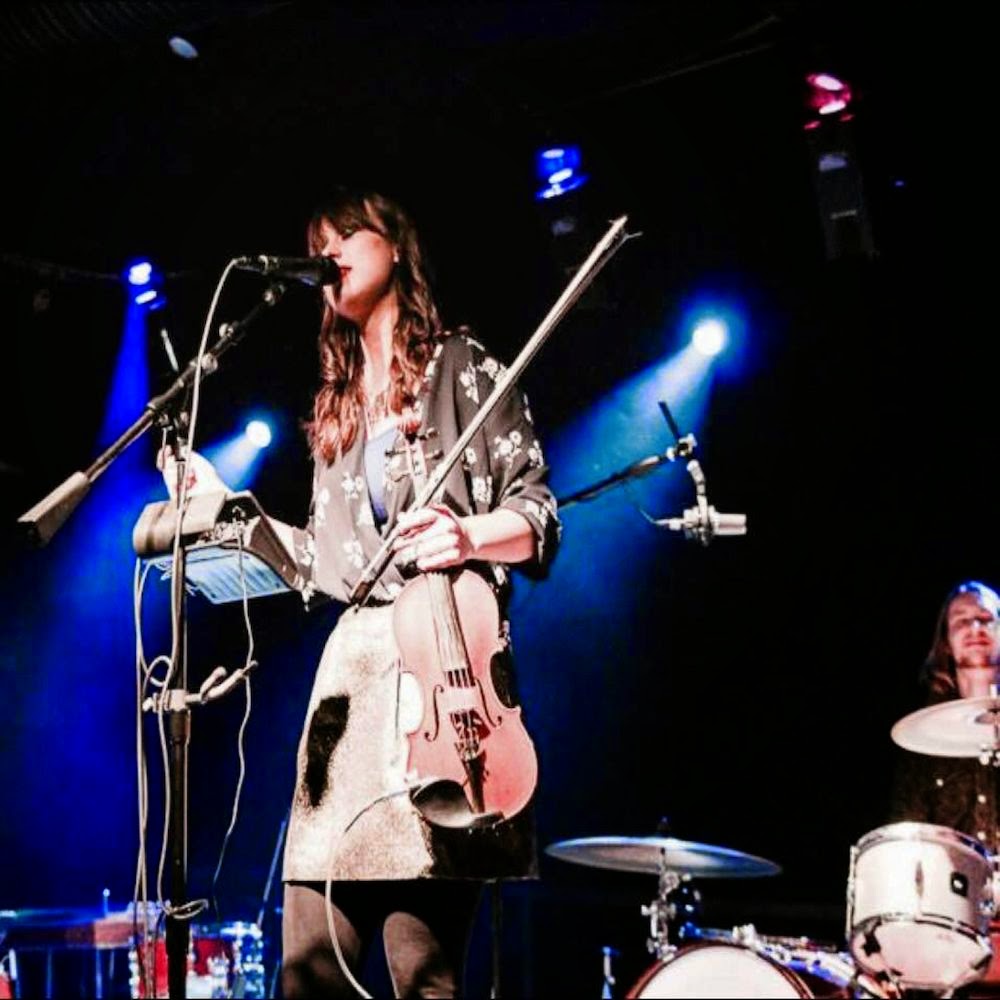 The Fontaines
"Paul Newman"
'The Fontaines' EP
self-released, 2015
Notes: "Siblings Hank and Charlotte Fontaine have coined a term for their stylishly retro pop music: “new-wop.” Indeed, the [of course, Los Angeles-based] Fontaines’ forthcoming debut EP is a finger-snapper, not unlike the doo-woppers of old, but their music’s modern touches reveal a little ’80s New Wave and contemporary indie-rock influence..."
(@The_Fontaines)

Houndmouth
"Sedona"
'Little Neon Limelight'
Rough Trade, 2015
Notes: "Stop licking your chops and hear all the good Houndmouth news that just was announced. The [New Albany, Indiana] alt-rockers will be back with their second album called Little Neon Limelight to be released March 17 via Rough Trade Records. Their newest single, "Sedona," was released on their website, via music video."
(@Houndmouth)

Ruby Jane
"Break The Radio" (Live On KUTX)
self-released, 2015
Notes: "If you’re the youngest person to play the Grand Ole Opry in Nashville, where do you go from there? Ruby Jane has opted not to stick to the country traditionalist’s path, instead lending her award-winning fiddle skills to Lady Gaga and Willie Nelson and imaginative covers of Wilco and Jeff Buckley... Ruby Jane stopped by Studio 1A last year and tried out “Break The Radio,” a new song that seems to speak directly to her worldview, ending on a simple turn of phrase: “Forget about the hype, baby.”"
(@RubyJaneMusic)

The Districts
"4th and Roebling"
'A Flourish And A Spoil'
Fat Possum, 2015
Notes: "Though they wrote the song in former guitarist Mark Larson's Pennsylvania basement, The Districts named their new single, "4th and Roebling," after an intersection in Brooklyn. More specifically, it's named after the first place they parked their car during their inaugural trip into New York to play a gig. The bluesy rock song reflects the swagger of a much older band (they're all 20 and under), but it also possesses the ragged, boozy quality of four young dudes excited to be someplace new. The track is off the The Districts' forthcoming Fat Possum full-length, A Flourish And A Spoil, which was produced by Angel Olsen collaborator John Congleton and drops February 10th."
(@TheDistrictsPA)

Step Rockets
"Turning Tides (By Your Side)"
self-released, 2015
Notes: "Step Rockets are back with a new single, “Turning Tides (By Your Side),” in the lead up to their highly anticipated EP. The song is catchy and laden with a tropical storm of synths. The Minneapolis quartet has now released a series of five solid singles over the past two years while constantly touring throughout 2014. The track adds to the band’s palette of powerful lyrics and infectious hooks, while showing the evolution of a band that continues to blend genres into a fresh, stylized indie pop sound."
(@StepRockets)

Sip Sip
"Continental Breakfast" (Live On KUTX)
'Party Record' EP
Raw Paw, 2013
Notes: "There’s truth-in-advertising when you name your debut EP Party Record. Sip Sip are the self-proclaimed kings of the local [Austin] party band circuit.. Party Record sounds like, well, a record collection having a party: hip-hop bumps up to post-rock, punk and jazz quickly become boozy buddies, and everyone’s having a great time because there’s a seventeen-piece band losing their minds onstage. Sip Sip stopped by Studio 1A last year and hipped us to their unique vision. “Continental Breakfast” is proof that fans of Steely Dan and the Rapture can come together in harmony – how great is that?"
(@SipSipMusic)

Redtenbacher's Funkestra
"Baby Fat"
'Dr. Hypenstein'
Wooden Hat, 2015
Notes: "Under the moniker Redtenbacher’s Funkestra, bassist Stefan Redtenbacher leads a group of top-notch musicians through his jazz and funk workouts. An alumnus of the Vienna Conservatory and Berklee College of Music, the Austrian-born musician and composer arrived in London after graduating from Berklee in 1996 and hasn’t looked back... His primary musical output is the jazz and funk outfit Redtenbacher’s Funkestra, who have gigged steadily for a decade and released eight albums, including this year’s Dr. Hypenstein... “Baby Fat” sounds like it was a blast to record, if not only because of its all-around explosive nature, but also because of the sense of sheer joy that runs through every explosive climax."
(@RBFunkestra)

Golden Dawn Arkestra
"Afropocalypse" (Live On KUTX)
'Golden Dawn Arkestra EP'
self-released, 2014
Notes: "The idea behind Austin’s Golden Dawn Arkestra is pretty free-form: bandleader Topaz McGarrigle started it as a way to soundtrack an imaginary movie... and they (unsurprisingly) tapped resident genre-hopper Adrian Quesada to producer their self-titled debut EP, which came out last year... we’re going back to their electric Studio 1A performance from last year. “Afropocalypse” will give you a taste of the frequency these Austinites are on – cosmic jazz never sounded so fun." We first heard from the Golden Dawn Arkestra back on Episode123 with some not-live music... But all the live music from KUTX this week is from bands playing the Map Jam in Austin this weekend!
(@GoldenDawnArk)

Chimurenga Renaissance
"HomieZ"
'Kudada Nekuva Munhu Mutema' EP
Brick Lane, 2015
Notes: "Otherworldly boom-bap meets Shona music in Chimurenga Renaissance, the Seattle-based project of Tendai Maraire and Hussein Kalonji. Both sons of musicians, Maraire and Kalonji were both long been active in Seattle hip-hop circles (Maraire is also a member of Shabazz Palaces) before starting Chimurenga Renaissance. (“Chimurenga” roughly translates to “the struggle for social justice” in English.) The first mixtape under the moniker, entitled Pungwe, was released in late 2012, and their debut album, riZe vadZimu riZe, followed in 2014. Earlier this year, the duo teamed up with Brooklyn-based DJ Chief Boima to release the Kudada Nekuva Munhu Mutema mixtape" We rocked "The B.A.D. Is So Good" by Chimurenga Renaissance back on Episode110 in May 2014.
(@Chimurenga1980)

George Ezra
"Did You Hear the Rain?"
'Wanted on Voyage'
Columbia, 2014
Notes: "George Ezra is 21, grew up in Hertford, went to music college in Bristol, came fifth in the BBC's Sound of 2014 poll, and has had a top 10 hit with a song called Budapest... But it's this darkish side that keeps you listening past the blithe singalongs. A relatively old song, Did You Hear the Rain?, remains the spookiest thing here ("Lucifer's inside!" Ezra avers)."
(@George_Ezra)

Bread & Butter
"Shoot My Mouth Off"
'Bread & Butter'
self-released, 2015
Notes: "Jangly, pop infused stoner rock is one label to spread all over local quartet Bread & Butter. This new Seattle group is still relatively obscure... the group does seem to have an affinity for beer, comestibles, and power pop. “Shoot My Mouth Off,” from their self-released debut is a catchy track with its raucous, rolling guitar riffs and inescapable melody. The addition of laid-back, reggae inspired vocals brings a lightheartedness to otherwise weighty lyrics. My suggestion: crack a Rainier, make a greasy sandwich and indulge in some Bread & Butter."
(#BreadAndButter)

****************************************
@PumpUpThaVolume Music News:
#AlbumOfTheDay: Chimurenga Renaissance (@Chimurenga1980 ) - 'Kudada Nekuva Munhu Mutema' EP
#AlbumOfTheDay: José González (@_JoseGonzalez_) - 'Vestiges & Claws'
#AlbumOfTheDay: The Church (@TheChurchBand) - 'Further/Deeper'
#AlbumOfTheDay: Sip Sip (@SIPSIPMusic) - 'Party Record'
@Sleater_Kinney's meets @BobsBurgersFOX in their new video for "A New Wave”
Stream “Go Out,” the first single from @blurofficial's upcoming album #TheMagicWhip
Hear the new @blurofficial single "Go Out"
@JEFFbrotherhood: "It was relieving when Warner were like, 'You guys have been dropped.' We were like, 'Uh, sweet.'"
Stream the phenomenal collaborative album from @ghostfacekillah and @badbadnotgood
We look back on Tricky (@KnowleWestboy)'s landmark debut #Maxinquaye on its 20th anniversary
Starbucks will stop selling CDs
It's Oscar weekend, so here's one of the best songs from recent years, like Elliott Smith - Miss Misery