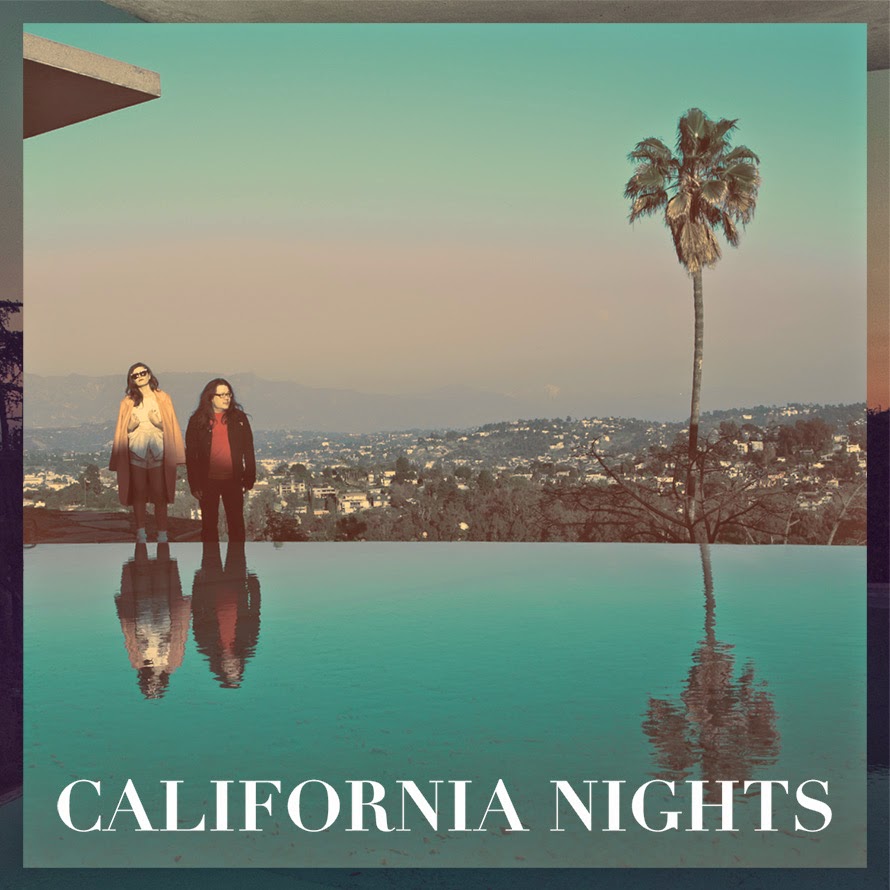 Brandi Carlile
"Wherever Is Your Heart"
'The Firewatcher’s Daughter'
ATO, 2015
Notes: "As a major-label recording artist, Brandi Carlile got frustrated with having to demo all her songs first before capturing the spark in a studio... For album number five, The Firewatcher’s Daughter, Carlile scrapped the demo process, going for a first-take-is-best-take approach... There’s a weariness at the center of “Wherever Is Your Heart,” which details Carlile’s literal and emotional traveling over the past decade as a musician. Still, that aforementioned energy buoys the song and the singer alike." We relegated this song to b-side status two weeks ago on Episode149 because, well, I was already sick of hearing it at my radio day job... But that's not a good enough reason to keep you from hearing this barn-burner of a great song - and she's from the Pacific Northwest, too!
(@BrandiCarlile)

Best Coast
"Heaven Sent"
'California Nights'
Harvest, 2015
Notes: "California Nights is the forthcoming [third and first for a major] LP from Best Coast, due out May 5th through Harvest Records. Following the release of the scorching, shoegaze-inspired title track, the SoCal duo has let loose “Heaven Sent”. Here, Bethany Cosentino & co. continue to showcase their newfound tenacity, dishing out whiplashing guitars and punk-like toughness. “Heaven Sent” may lyrically strike a chord in the heart, but its rockin’ aggression was made for the pits." It's Best Coast's fourth time on PUTV - plus they were on our 'Best of 2012' release!
(@Best_Coast)

Laura Marling
"False Hope"
'Short Movie'
Ribbon, 2015
Notes: "Laura Marling is following up 2013’s Once I Was An Eagle — one of the best albums of that year — with Short Movies... “False Hope” picks up the momentum at a galloping pace, with Marling traveling through what seems like at least two solid hooks and never settling on one of them. “Is it still okay that I still don’t know how to be alone?” she opens asks at the start of the track. “I hear you crying to the wall,” she later shouts over herself, her voices battling it out to see who lands on top." Making her third stop on PUTV, we heard the London artist's title track back on Episode141.
(@LauraMarlingHQ)

Sallie Ford
"Oregon"
'Slap Back'
Vanguard, 2014
Notes: "After the 2013 dissolution of her previous project, the beloved Sallie Ford & The Sound Outside, Ford went back to the drawing board for her first solo album... Ford was looking to move in a new direction with a new band, so she returned to Portland and did just that... An ode to Ford’s adopted home state of Oregon, “Oregon” is a punchy garage pop gem, thick in its power chord punch and not lacking in Ford’s contagious charisma." She's one of my favs and it's Sallie's fifth time on PUTV - not counting her slot on our 'Best Of 2014'!
(@SallieFordMusic)

Surfer Blood
"I Can't Explain"
'1000 Palms'
Joyful Noise, 2015
Notes: "For their first album since parting ways with their major label, indie rockers Surfer Blood opted to return to their DIY roots. The quartet holed up in its home studio to forge their new material sans a producer. Those sessions resulted in 1000 Palms, out May 12th via Joyful Noise. We’ve already heard the band’s manic “Grand Inquisitor”, now they’re indulging their inner guitar nerds with their first official single, “I Can’t Explain”." We've stacked the musical deck with all inds of  my favorites this week and I'm excited for the return of Surfer Blood!
(@SurferBlood)

Native Lights
"Black Wall Street"
'Native Lights'
Passive, 2015
Notes: "Native Lights combines the forces of post-rock veterans Bryce Chambers of Ester Drang and Johnathon Ford of Unwed Sailor. The result is a sound that’s as deep and dark as classic shoegazers like My Bloody Valentine and Slowdive, but on an even grander scale. “Black Wall Street” immediately pulls you into a glittering abyss before it veers off into a window-shattering chorus. The duo honed their epic sound between recording in an abandoned cattle auction facility in rural Oklahoma and mixing with Kevin Ratterman, who has worked with bands like Young Widows, My Morning Jacket, and Maserati."
(@NativeLights)

Public Service Broadcasting
"Go!"
'The Race For Space'
Test Card, 2015
Notes: "London duo Public Service Broadcasting hit upon a winning combination of guitars, electronics and vintage public information films for their 2013 debut, Inform-Educate-Entertain. The follow-up focuses on the US-Soviet space race, between 1957 and 1972. It’s a smart move. Archive samples evoke the wonder and majesty of mankind’s most giant leap, and they’re complemented by finely judged soundscapes, from the mournful, static-soaked drone of Fire in the Cockpit (detailing the tragedy of Apollo 1) to the pulsing euphoria of Go! (the successful July 1969 moon landing)." We first heard PSB one year ago on Episode101 - and damn, I'm hoping to see them in town next week!
(@PSB_HQ)

Hot Sugar
"Slaughter"
'God's Hand'
Break World Records, 2015
Notes: "[NYC's] Hot Sugar, aka Nick Koenig, has quietly been at the forefront of experimentation in electronic music with what he calls “associative music.” In layman’s terms, that’s finding the music in everyday noises, like raindrops on a window or the clang of hanging up a pay phone... His debut LP, God’s Hand, is by far the most complete and complex Hot Sugar project to date. Having collaborated with The Roots and contributed music to Comedy Central’s Broad City, Koenig has a track record of working with great people on great things, but it’s when he’s left to his own devices that he truly shines."
(@HotSugar)

Les Sins
"Bother"
'Michael'
Company, 2014
Notes: "As Toro Y Moi, Chaz Bundick has gone from making murky, queasy bedroom-pop to crafting slick, twitchy soul. There’s plenty of room for experimentation and change in Toro Y Moi, then, but there’s not quite enough for Bundick. He’s got a whole other alias as Les Sins, the alter-ego he’s used to release a few instrumental dance singles over the year, the most recent of which, “Grind” b/w “Prelims,” dropped last year... Bundick will release his first full-length album as Les Sins. It’s called Michael, and it’s almost completely instrumental, though Californian singer-songwriter Nate Salman does guest. The first single is an idiosyncratic quicksilver piece of house music called “Bother,”..." We heard Les Sins back on Episode140 and we heard Toro Y Moi just two weeks ago on 149! (Not to mention his spot on our 'Best Of 2014' with Chromeo 😉 )
(#LesSins)

Har-di-Har
"We Scare Each Other"
'EP'
self-released, 2015
Notes: "Har-di-Har are [Minneapolis] husband and wife Julie and Andrew Thoreen. The single “We Scare Each Other” off the new EP is a beautiful pop oddity full of broken beats and psyched-out keys that drone along with light horns that follow the duo’s warm vocals up and out of verses." A double shot of Twin Cities self-release action!
(@HardiHar_music)

The Bilinda Butchers
"Edo Method"
'Heaven'
Orchid Tapes/Fastcut, 2014
Notes: "The Bilinda Butchers give us their debut album ‘Heaven’... The San Francisco-based trio...reached for the lofty goal of creating a concept record based around a fictional love story set in 19th century Japan. ‘Heaven’ being the soundtrack... ‘Tanka’ and ‘Edo Method’ are the strongest songs on the record. Both play with pitch bending synths against breakbeats with fantastic vocal melodies."
(@BilindaButchers)

Dreamsalon
"Soft Stab"
'Soft Stab'
Sweet Rot/Dragnet, 2015
Notes: "Seattle’s Dreamsalon are back in the public consciousness with the follow up to their infectious 2013 debut LP, Thirteen Nights... The album’s title track is spaced out garage psych at its finest, spilling out of the speakers with its genre flirting sounds and shattering any predefined notions that you had about what you were listening to... Dreamsalon excels in crafting out a well-defined internal coherence while constructing a masterful weave in which everything seems to swirl around the next, and on “Soft Stab”, they are in their finest form."
(@Dreamsaloon)