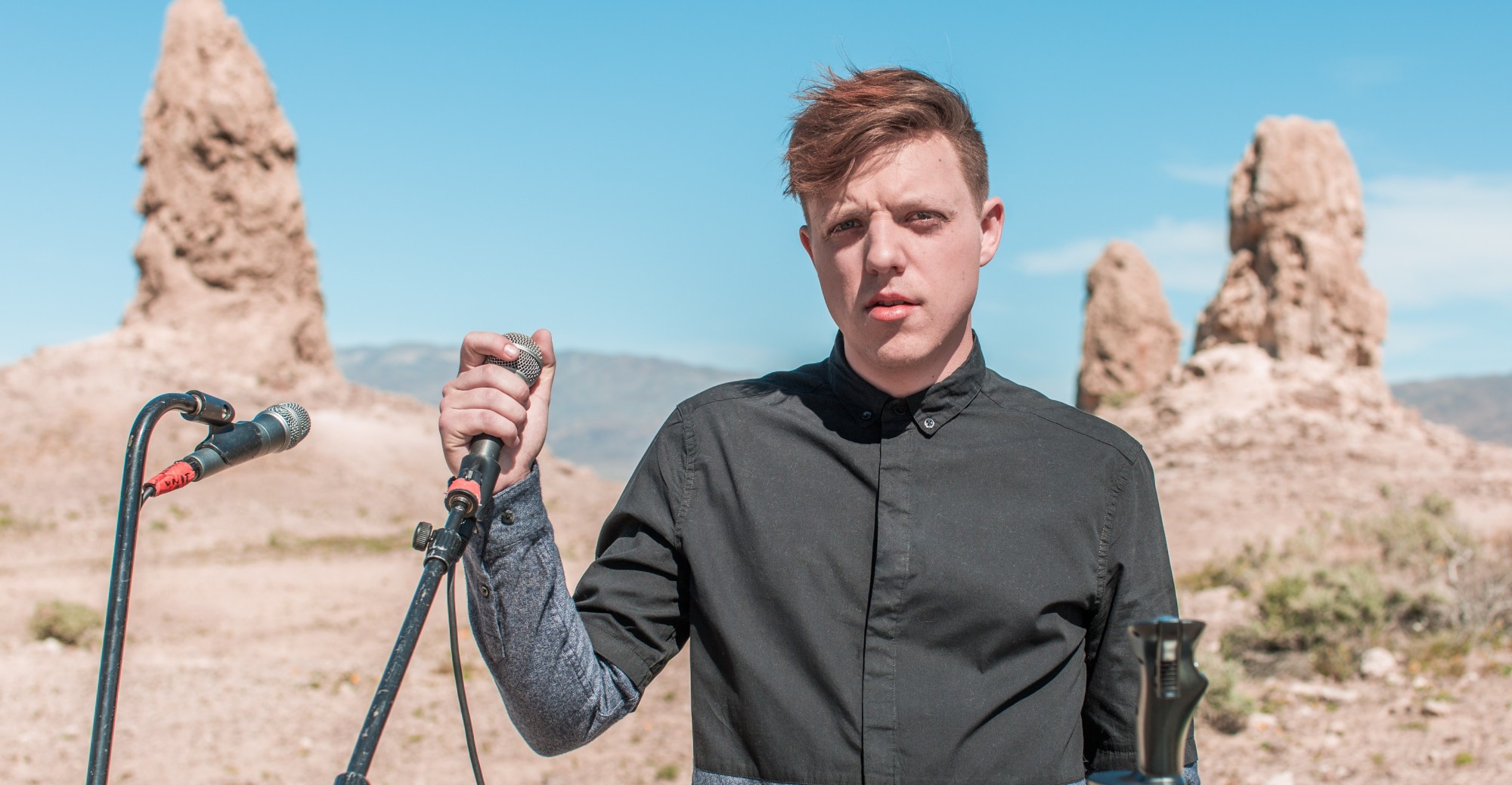 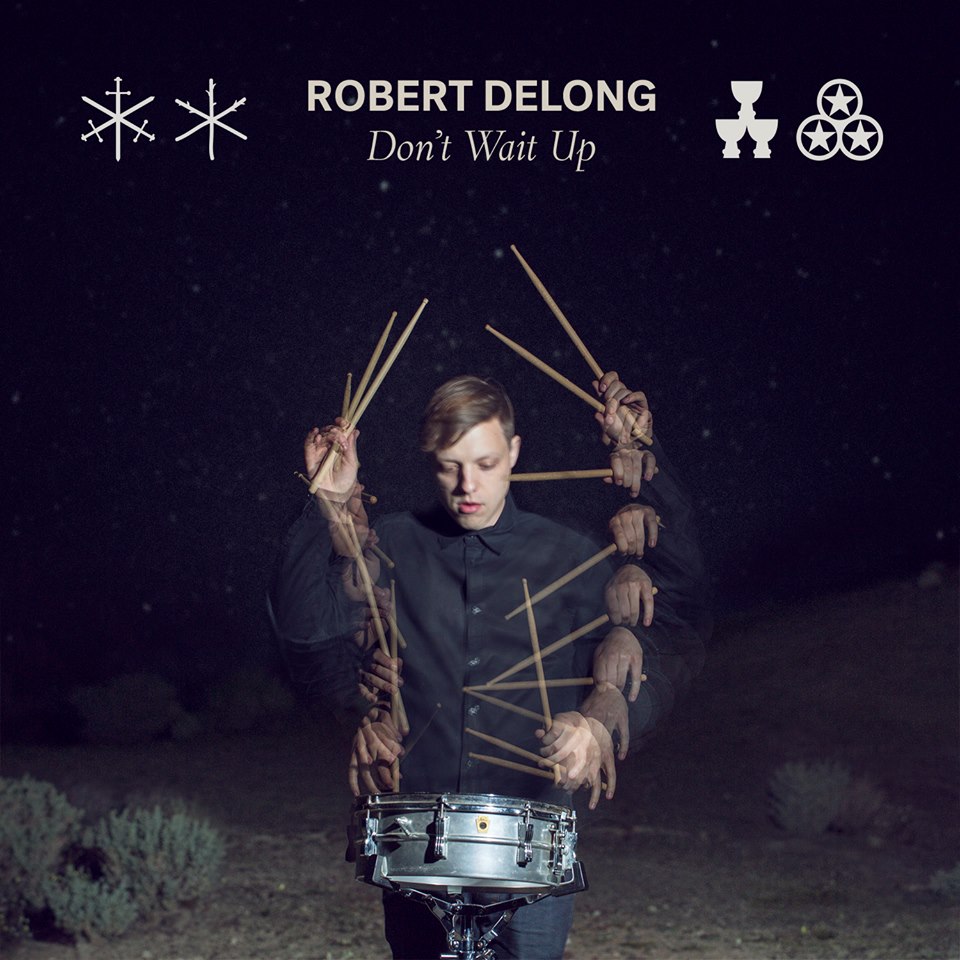 Swervedriver
"Winter Depths"
'Adult Swim Singles'
Williams Street, 2015
Notes: "Adult Swim, in addition to making some of the weirdest and stoner-friendly cartoons out there, is a pretty exceptional music patron... the network’s annual singles series...sixth entry, English shoegaze group Swervedriver have contributed a cool new track that hearkens for a time that’s not the muggy middle of July. “Winter Depths” has plenty of energy and confident guitar riffs that keep it moving along at a nice clip, but there’s a hazy melancholy throughout that gives it a vague but definite sadness." It's Swervedriver's second shoegazey spin on PUTV.
(@SwervedriverUK)

Robert DeLong
"Don't Wait Up"
'In The Cards'
Glassnote, 2015
Notes: "Much anticipated sophomore album from alternative/electronic artist Robert DeLong. Album was preceded by the 'Long Way Down' EP who's titular track will be featured on the album as well as one other track from the EP titled 'Acid Rain.' The albums lead single 'Don't Wait Up' was released accompanied by a music video... It's Robert Delong's third time on PUTV and his new LP drops 9/18.
(@DeLongMusic)

Menace Beach
"Super Transporterreum"
'Super Transporterreum' EP
Memphis Industries, 2015
Notes: "Catchy, pop tinged music is not something you’d expect from a band that includes Hookworms member MJ, but that is exactly what Leads 5-piece Menace Beach creates. It makes more sense once you consider that their infectious melodies and pop hooks are rooted in chaotic fuzz and noise. It’s a formula used to great success on the group’s debut album, Ratworld, released earlier this year, and on the self-titled single off their upcoming EP, Super Transporterreum, the band continues the trend." It's also Menace Beach's second time on the show.
(@Menace_Beach)

Futurebirds
"Deadbeat Hits"
'Hotel Parties'
Easy Sound, 2015
Notes: "Futurebirds singer Carter King indulged in a half-serious flight of fancy while writing “Deadbeat Hits,” a song from the Athens, Ga., band’s upcoming album... With a descending figure on steel guitar and King’s hazy vocals, the twangy tune has a genial summertime feel as it scrolls by... King says he wrote the song a few years ago in the midst of heavy touring. “It’s a little bit of satire about the desire to record a smash hit, get treated like gods, and start acting like [expletive],” he says." Another second-timer, the Futurebirds were first on Episode066 back in July 2013.
(@Futurebirds)

Low
"What Part of Me"
'Ones and Sixes'
Sub Pop, 2015
Notes: "[Long-running Duluth, MN trio] Low recently announced Ones and Sixes, their follow-up to 2013's The Invisible Way. (It's out September 11 via Sub Pop). After dropping "No Comprende", the band have shared another album cut, "What Part of Me"." It's Low's fifth time on PUTV.
(@LowTheBand)

Daniel Romano
"I'm Gonna Teach You"
'If I've Only One Time Askin''
New West, 2015
Notes: "Canadian country singer Daniel Romano's new album, If I've Only One Time Askin'... the second single, "I'm Gonna Teach You." For this one, he brings in tremendous string arrangements and thunderous percussion. He calls it a "triumphant revenge anthem.""
(@TheDanielRomano)

Charlie Parr
"Stumpjumper"
'Stumpjumper'
Red House, 2015
Notes: "Though Charlie Parr hails from the wilds of Minnesota, he took to the hills of North Carolina to make his new Stumpjumper LP where producer Phil Cook and his crew set up a space on the Down Yonder Farm capable of capturing Parr's first-ever full band record. Parr is a picker -- whether on National resonator guitars, dobro, or banjo -- who cut his musical teeth on Charley Patton, Woody Guthrie, and Lightnin' Hopkins, and his actual teeth on the canned meat packed at the Hormel plant in his hometown. A product of both elements, Parr's songs ring out with a working class ethos and a welcome home energy."
(@theCharlieParr)

The Dead Weather
"I Feel Love (Every Million Miles)"
'Dodge and Burn'
Third Man, 2015
Notes: "The Dead Weather will return next month with their first new album in five years. Ahead of its September 25th release, Jack White, Alison Mosshart, Dean Fertita, and L’il Jack Lawrence have previewed Dodge and Burn through a series of 7-inch singles: “Open Up (That’s Enough)”, “Rough Detective”, “Buzzkill(er)”, and “It’s Just Too Bad”, which were all released exclusively to members of Third Man Records’ Vault subscription program."
(#DeadWeather)

Drinks
"Laying Down Rock"
'Hermits On Holiday'
Heavenly, 2015
Notes: "Drinks is the new and somewhat unlikely combination of Cate Le Bon and Tim Presley aka White Fence. Their collaborative album Hermits On Holiday will be out mid-August, and we’ve already heard the jittery title track and seen its fuzzy, quirky video. Today they’ve shared another song, “Laying Down Rock,” and Presley handles vocals on this one."
(@Drinks__Band)

Here We Go Magic
"Falling"
'Be Small'
Secretly Canadian, 201
Notes: "Brooklyn future-pop prog-rockers Here We Go Magic are releasing their first new album since 2012’s Nigel Goodrich-produced A Different Ship. This one, their fourth, comes sans a big name producer and was entirely mixed and recorded by the band themselves, hence the title: Be Small." We haven't heard from Here We Go Magic since Episode009 back in May 2012!
(@HereWeGoMagic)

Electric Wire Hustle
"Brother Sun" (w/ Kimbra)
'Aeons' EP
Bastard Jazz, 2015
Notes: "The blue-eyed soul of Electric Wire Hustle elevated the New Zealand group into underground critical darlings over the past few years. A beautiful fusion of hard hip-hop rhythms with morning-dew melodies have created something that even the most screw-faced heads can nod along to. "Brother Sun" is the first offering from their upcoming Aeons EP. The optimistic track has fellow kiwi Kimbra fortifying the helio-centric call." Second spins for both Electric Wire Hustle & Kimbra.
(@E_W_H)

Reina del Cid
"Mice and Men"
'The Cooling'
self-released, 2015
Notes: "The life of singer-songwriters who have attempted to navigate the modern music biz is littered on a highway to hell. A nearly-impossible task of "making it" seems a daunting task for even the most noble of bards. But thankfully the Minneapolis-based indie folk artist Reina del Cid ignored the warnings and delivered a remarkably coherent effort, start to finish. The Cooling is smart and evocative and basic - vocals, guitars, upright bass and drums. These are road tested songs that have found adoring audiences all over the midwest. Now they have the opportunity to find a larger audience..."
(@ReinaDelCid)

Reuben Hollebon
"Faces"
'Terminal Nostalgia'
Bright Antenna, 2016
Notes: "British alternative musician, Reuben Hollebon, is thrilled to announce the release of his debut album, Terminal Nostalgia, which will be released in early 2016 on Bright Antenna Records... The largely self-produced 12-track LP is colored by Reuben’s discovery of music as a therapeutic outlet for him. Terminal Nostalgiasoundscape takes influence from Reuben’s time as a recording engineer for several well-known acts, including Basement Jaxx, Courtney Barnett and The London Symphony Orchestra."
(@ReubenHollebon)

Golden Gardens
"Mirror of Silver"
self-released, 2015
Notes: "Golden Gardens namesake was inspired by Lewis Carroll’s poem “All in the Golden Afternoon” and the image of Seattle’s Golden Gardens park in late Spring. They also self describe their music as “dreamscapes and anthems for magical minds.” So it is no surprise that the duo make music that uses its sunny disposition to provide ample opportunity to get lost in. Single “Mirror of Silver” begins with thumping bass and seems to be primed to break out into a club ready dance track." It's Golden Gardens's third time on the show and first since Episode044 back in February 2013.
(@Golden_Gardens)