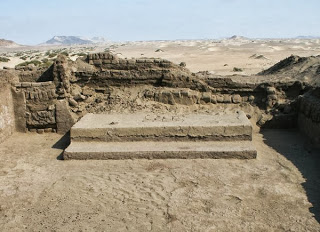 Yes, it's yielded human remains—including five females who may have been ritually sacrificed. But it's the signs of life that make a half-excavated Peruvian pyramid of the Moche culture stand out, archaeologists say.
"Often these pyramidal mounds were built as mortuaries more than anything else," said excavation co-leader Edward Swenson. (See pictures from the tomb of the Moche "king of bling.")
"In most instances [a pyramid] is not where people live, it is not where they were cooking their food," the University of Toronto archaeologist added.
But the newly exposed 1,400-year-old flat-topped pyramid supported residences for up to a couple dozen elites, who oversaw and perhaps took part in copper production at the site, evidence suggests.
The pre-Inca pyramid dwellers likely presided over important rituals, feasted on roasted llama and guinea pig, and drank corn beer, according to archaeologists working at the site.
Among the signs of occupation are at least 19 adobe stands where large vessels of water and corn beer were stored, as well as scattered llama, dog, guinea pig, and fish bones and traces of coca leaves and red peppers.
"There's a far more robust domestic occupation than what we would have expected," said expedition co-leader John Warner, an archaeologist with the University of Kentucky.
Pyramid Emerges
Thriving along Peru's arid northern coast from about A.D. 100 to 800, the Moche culture was composed of independently governed agricultural societies. These groups shared a common religion and a knack for irrigation systems, intricate ceramics, and metallurgy.
In August 2009 Swenson and colleagues began excavating a long mound at the roughly 60-acre (24-hectare) Huaca Colorada site in the Lamayaeque region's southern Jequetepeque Valley.  The settlement dates to the Late Moche period, about A.D. 500 to 800.
During the first month of the dig, the team uncovered the mud-brick pyramid within the mound as well as the residences. Later digging turned up evidence of human sacrifice on a rooftop platform: detached body parts and the corpses of five young women, all with signs of ritual burning and one with a rope around her neck.

Measuring about 1,300 feet (390 meters) wide by 460 feet (140 meters) deep, the pyramid is Huaca Colorada's most prominent feature.
Built on a slope, the pyramid appears almost flat when viewed from the north. On its the southern side, however, the monument rises about seven stories at its tallest point—an imposing sight to anyone approaching from that direction.
"They very cleverly utilized the topography to their advantage, to give the appearance of monumentality," Warner said.
"Nasty Business" on Pyramid
Excavations indicate that the Huaca Colorada pyramid may have been home to a group of elite coppersmiths.
On lower levels of the pyramid, for example, are smelting pits, where copper tools and ornaments were fashioned, the archaeologists say. The team also found knives, spatulas, and other copper goods on the pyramid.
It may seem odd that Moche copper workers would have wanted to live above the store, Warner said. For one thing, "copper production is a pretty nasty business from an ecological point of view."
For example, intense fires would have been required to maintain the 1,984-degree-Fahrenheit (1,084-degree-Celsius) temperature necessary for melting copper. The blazes would have cloaked the mound in a dirty, smoky haze, he said.
"It's pretty fascinating that it is occurring in such close proximity to what we right now interpret to be elite residential quarters," Warner said.
Still, the University of Toronto's Swenson said, it's possible the workers lived the high life precisely because of the copper production.
"We know that within a Moche context that metallurgical production is not something that can be understood simply as an economic utility divorced from Moche religious and cultural values," he said.

"It was probably something that was steeped with certain ritual understanding."