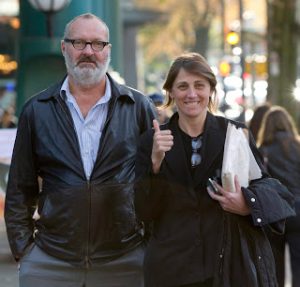 from ap: Randy Quaid says he would like to return to the United States one day, but he and his wife still fear they are being persecuted by California prosecutors and tabloid media.

Although U.S. officials recently refused to seek extradition of the actor and his wife from Canada to face felony vandalism charges in Santa Barbara, Calif., authorities in the coastal town say they’ll still have the couple arrested if they return to the states.

The Quaids, who have missed several court appearances in the case, claim they are the victims of corrupt forces and are demanding an investigation.

“I feel like we’ve been driven out of the country and that the door’s been slammed behind us,” Quaid told The Associated Press in a phone interview from British Columbia on Friday. “And for what, these phony little trespassing, vandalism charges? Santa Barbara can sleep better tonight knowing the Quaids are out of their hair.“…

Quaid sought asylum, claiming he was being hunted by “Hollywood star-whackers” who had killed his friends Keith Carradine and Heath Ledger…

Drawing parallels with the phone hacking scandal that has engulfed British papers owned by Post parent News Corp., Randy Quaid claims he had discussed many details that were included in the Post piece with his attorney on a cell phone before boarding a flight in New York.

As the plane was about to leave, the Quaids said Post columnist Michael Riedel contacted him about the allegations, which the Quaids believe could have only been revealed if someone had hacked their phone.

The paper rejected the allegation in a statement released to the AP late Friday. “Michael Riedel categorically denies this claim,” the paper said in a statement, stating that Quaid has provided no proof he was hacked.

The Quaids say they hope other stars will speak out and that inquiries by U.S. authorities will expose dirty tabloid tactics similar to those surfacing in the U.K. “At least they’re outraged in England,” Evi Quaid said. “I hope that it crosses to New York and people get angry.”

One response to “Quaids Claim Corruption Keeping Them In Canada”