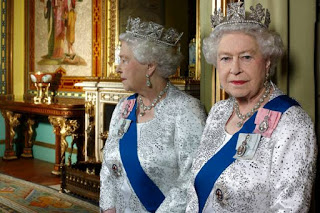 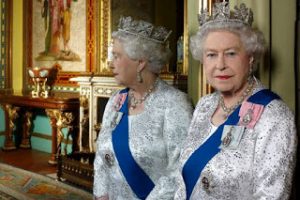 Is Queen Elizabeth’s official Diamond Jubilee picture, possibly, an occult message to those in the know about an upcoming change?  Zen Gardner suggests in recent blog, "...common belief amongst many cultures is that...seeing one’s reflection was also considered an omen of death. Is that why she’s not so happy, she’s picking up on it? Or is she being set up and this is another Illuminati ceremonial portrayal at work letting their minions know what the plan is?" The present writer suspects this is certainly how "they" handle their affairs."After all, if Prince William is gonna make his move to stardom starting this year, as many predict, something’s gotta give in the chain of command," continues Gardner. Is this a symbolic portrait of passing over?  Gardner makes keen observation about the Queen and her allegiances, "talk about implying the interdimensional while staring at humanity with complete disdain. This is just disgusting. You sure know who she reports to as well. The Knights Templars’ cross insignia is on her chest (reflected, so twice) and is the dominant image on her crown." The Queen reports to the god of this world, it appears, but she may be close to checking out?