Since 2005, Media Monarchy has covered the real news about politics, health, technology and the occult - all remixed with music and media that matters.
Home > #FoodWorldOrder, #Monarchives 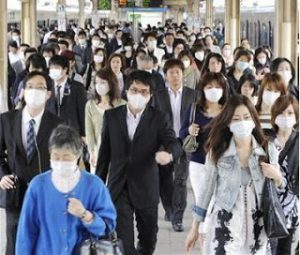 Japanese chic facial ware may be coming to America? Radiation concerns can be seen in geiger counters sold out. GE Mark 1 nuclear reactors are "operating safely" at 23 American plants; similar in design to damaged Fukushima reactors. The Japanese feel betrayed by government, according to Yoichi Shimatsu's most recent update on the disaster here. A suspicious lack of response has same whiff of Hurricane Katrina rescue efforts. Japan still hasn't moved to entomb the reactors and eerily reminescent of slow response in New Orleans? Is it predatory capitalism?

A blog entry at Humans Are Free makes several suppositions how and why an insane New World Order elite precipitates "natural disasters". The modus operandi considered is a Stuxnet infection, establishing outside access to critical Siemens PLCs that control coolant rods. Industrial operations are under increased cyber-attacks. HAARP is implicated in eliciting earthquake that resulted in a tsunami.

The most interesting suggested link is, perhaps, Japan's issuing 15 Trillion in currency, which is viewed as likely used by US Federal Reserve as a means to further dilute damage done by derivatives. It's coincidental the Fed announced quantitative easing will end June 30th. The world has clearly gone crazy. The present writer subscribes to view there are capitalists, who will attempt to profit off of death and destruction!