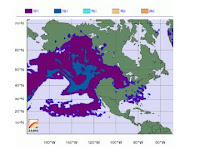 Are increased infant deaths recorded in Pacific NW, since March, due to Fukushima fallout? Where is the US government to provide any guidance? Are you psychologically prepared for the answer? A recent Counterpunch article by Dr Janette Sherman and Joseph Mangano begins starkly, "US babies are dying at an increased rate." The article reports statistics, as provided by the CDC Morbidity and Mortality Weekly Report, eight cities in the Pacific Northwest totaled a greater number of infant deaths for babies less than a year old. Infant deaths averaged 9.25 per week for four week period ending March 19, 2011. Infant deaths averaged 12.5 for ten week period ending May 28, 2011. The eight cities contributing to statistically significant total: Seattle, Spokane, Boise, Portland, Sacramento, San Francisco, Berkeley and Santa Cruz. The Japanese government has yet to move to entomb the reactors or dig ditches to prevent contamination of surrounding groundwater! This uncharacteristic lack of initiative seems a huge indicator of a sinister agenda at work behind the scenes and will be of interest to note any change in course after the Bilderbergers meet?