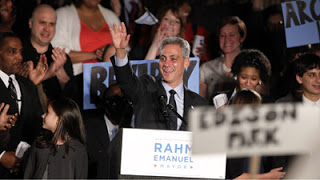 He faces a series of challenges, beginning with the fact that his last name is not Daley. His predecessor, Richard M. Daley, and his father, Richard J. Daley, have controlled the city of 2.69 million for 42 of the past 55 years. The current economic crisis in the United States has affected the Midwestern city as it has others, leading to an estimated budget deficit of some $600 million.

Nevertheless, Emanuel's popularity may stand him in good stead, at least initially: the 51-year-old former Congressman won 55 per cent of the vote in a field of six candidates, thus ending the need for a run-off in April. Gery J. Chico, former chief of staff to incumbent Mayor Richard M. Daley, his closest competitor, garnered less than half with only 24 percent.

Emanuel is known as a tough pragmatist and for his blunt manner of speaking. During his tenure as chief of staff in the Obama White House, he told an Israeli diplomat that the United States was “fed up” with Israel. Less than a year later, however, as he considered a run in the Chicago mayoral race, he told rabbis that the Obama administration had “screwed up the messaging” and failed to convey its support for the Jewish State.

President Barack Obama called Tuesday night to congratulate Emanuel, saying, “As a Chicagoan and a friend, I couldn't be prouder.”