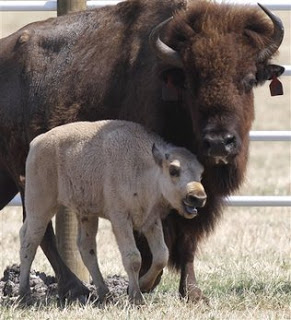 from miamiherald.com: A rare white buffalo found dead in Texas died from a bacterial infection and wasn't killed and mutilated, as its owner suspected, authorities said Tuesday.

Hunt County Sheriff Randy Meeks said a veterinarian made the determination and that photographs indicate the calf wasn't skinned. He said the investigation is closed unless new evidence surfaces.

The calf, named Lightning Medicine Cloud, died in May on the Lakota Ranch near Greenville, about 50 miles northeast of Dallas.

Ranch owner Arby Little Soldier reported finding the calf skinned and believed it had been killed as part of a hate crime. He didn't return a message seeking comment Tuesday. Meeks said Little Soldier had not been notified about the results of the investigation as of Tuesday afternoon.

As a non-albino white buffalo, the calf was revered by Native Americans. According to Lakota Sioux lore, the goddess of peace once appeared in the form of a white buffalo calf. The buffalo's death sparked international attention, Little Soldier has said, and one Oregon organization planned to donate a white buffalo bull from its herd.