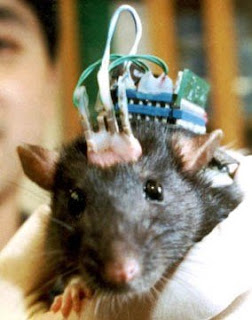 from dailymail.co.uk: Faulty parts of living brains have been replaced by electronic chips, in an astonishing and controversial scientific breakthrough. It's a move that has been anticipated many times in science fiction, with creatures such as The Terminator, a 'cyborg' hybrid of flesh and machinery. But now, researchers at Tel Aviv University have successfully created circuits that can replace motor functions - such as blinking - and implanted them into brains. They hope the technology could in the future help people suffering from brain malfunctions such as Parkinson's disease - by replacing damaged or malfunctioning tissue with chips that perform the same function. 'Imagine there's a small area in the brain that is malfunctioning, and imagine that we understand the architecture of this damaged area,' said Professor Matti Mintz, a psychobiologist, speaking to the BBC. 'So we try to replicate this part of the brain with electronics.'