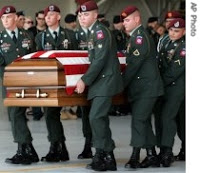 2007 deadliest for US troops in iraq

from ap: The second half of 2007 saw violence drop dramatically in Iraq, but the progress came at a high price: The year was the deadliest for the U.S. military since the 2003 invasion, with 899 troops killed. American commanders and diplomats, however, say the battlefield gains against insurgents such as al-Qaida in Iraq offer only a partial picture of where the country stands as the war moves toward its five-year mark in March.

from huffington post: U.S. military deaths, suicide bombings and opium production hit record highs in 2007. Taliban militants killed more than 925 Afghan police, and large swaths of the country remain outside government control. But U.S. officials here insist things are looking up: The Afghan army is assuming a larger combat role, and militants appear unlikely to mount a major spring offensive, as had been feared a year ago. Training for Afghan police is increasing.

from press tv: After the first wave of rise in global food prices last summer, the second wave is about to result in record high prices in many years. In Chicago, wheat and rice prices for delivery in March have reportedly jumped to an all-time high, while the rise in the prices of soybean and corn has also been very steep, the prestigious business daily, Financial Times, reported... Some analysts are of the view that the rise in food prices experienced throughout 2007 will continue in the next year. High demand, poor harvests and low stockpiles of food have been mentioned as reasons for higher food prices.