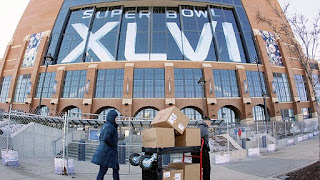 from espn: What could ruin a fan's once-in-a-lifetime trip to the Super Bowl more than his team's quarterback fumbling away the game in the final seconds? Try a trip to the emergency room courtesy of food poisoning. In just a few days, tens of thousands of fans will converge on Lucas Oil Stadium in Indianapolis for Super Bowl XLVI. They'll be eager to cheer for their teams, and as part of their celebration, they likely will fork out a small fortune for all kinds of stadium food -- from pork to pizza to pot roast sandwiches. Like eating out anywhere, fans will do so on a leap of faith that the food being served will be bacteria- and pest-free.

"Outside the Lines'" The File recently acquired 2011 Marion County health department inspection records for the 181 food and beverage outlets inspected at Lucas Oil Stadium and found that 25, or 14 percent, of the locations had critical violations that showed up during routine inspections. A 2010 "Outside the Lines" piece that examined food safety at all professional sports stadiums showed that about 7 percent of the vendors at Lucas Oil Stadium had racked up critical violations -- problems that could lead to illness.