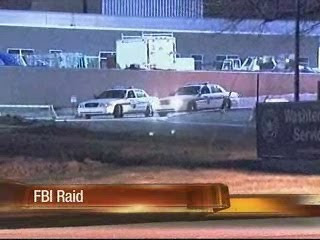 from infowars: On Saturday night [mar27] the FBI and Homeland Security conducted what was described as a “major” operation against the Michigan militia. As of Sunday morning, the operation was not reported by national media, although it was covered by local media in Michigan.

It appears raids are being conducted in Hammond, Indiana, and Sandusky, Ohio, as well. “Hammond police assisted with an FBI raid Saturday evening in the Indiana city, but federal officials would not release any details,” Chicago Breaking News Center reported.

FBI, Homeland Security, and agents from the Sandusky Police, Erie County Sheriff’s deputies, agents from Toledo Police Bomb Squad and Cleveland Regional Transit Authority’s K9 Unit conducted an operation in Ohio. “Some officers in green uniforms carried large automatic rifles,” the Sandusky Register reports this morning. An FBI spokesman said warrants were sealed in federal court and he could not release any information until after the suspects appear in court Monday...

Addendum: The corporate media has reported on the raids. “The FBI confirmed to Local 4 [in Adrian, Michigan] that there were several law enforcement activities in the Lenawee/Washtenaw County area late Saturday night,” reports MSNBC. “Michigan State Police said the raids are not terror related, but would not comment further.”

Update: Fox News reports this afternoon that seven people have been arrested for allegedly selling pipe bombs in Michigan, Ohio and Indiana in connection with the federal raids. “The arrests and raids in Michigan and Indianapolis are related to alleged militia activity in the region, but are not related to international terrorism. There is not a current threat to the public, according to a law enforcement source.”

chicago cabdriver accused of helping al-CIAda*
the coming of an american reichstag?*
anti-hate group finds yet another group it hates*
video: alex jones behind the scenes of cnn attack piece* (1/2)