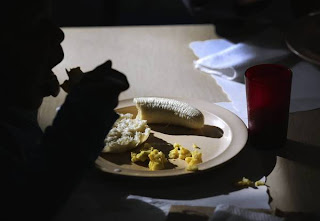 from chicagotribune.com: Researchers at Rush University Medical Center in Chicago have found that adults who occasionally went hungry during childhood had a slower rate of decline in their cognitive abilities as they aged than those who always had enough to eat as children.

"We didn't expect these results. We thought hunger was related to faster cognitive decline," said lead author Lisa Barnes, a cognitive neuropsychologist at Rush's Alzheimer's Disease Center. "We don't understand what they mean. The biological basis is not known. We know from animal literature that there is evidence that caloric deprivation increases life span. However, it's a big leap to human work.

"The take-home message is that early life experiences do matter and can affect life in old age."

The research was published in the Dec 11 issue of the American Academy of Neurology's journal Neurology.

The study examined 6,100 older people enrolled in the Chicago Health and Aging Project, which, among its efforts, studies risk factors for Alzheimer's disease. The group had a median age of 75.