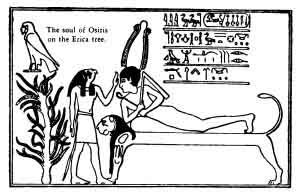 Resurrection: A History of Myths

from livescience.com: Ancient accounts tell of an important figure whose birth would be heralded by a star in the heavens, a god who would later judge the dead. He would be murdered in a betrayal by one close to him, his body hidden away — though not for long, as he would return in a miraculous resurrection to begin an eternal reign in heaven.

To his legions of followers, he (and his resurrection) came to symbolize the promise of eternal life.
The figure, Osiris, was the supreme god in ancient Egypt, only one of many pagan gods worshipped thousands of years before the birth of Jesus. Indeed, though Jesus is currently the best-known example of a resurrected figure, he is far from the only one.


In modern times, there are a handful of documented cases of people coming back from the "dead," such as a condemned prisoner who somehow survived a hangman's noose (especially before the "long drop" was implemented to snap the neck), or an avalanche victim declared dead but who later recovers.

Though these cases are often characterized as miracles, they are better understood as medical misdiagnoses, since the victims were never fully and clinically dead. Some people have recovered after their heart stopped beating or their lungs stopped working, even for an hour or more. But the most important medical criterion is brain death, from which no one has recovered.

In mythology, the phoenix bird could live for a millennium before dying, whereupon it would burn brightly and arise, reborn from its own ashes. Though Islam largely rejects the idea of resurrection, like Christianity it promises an eternal afterlife.

In Eastern religions, the popular idea of karma is closely tied to resurrection and reincarnation. The concept of karma varies somewhat among Buddhists, Hindus, and Jainists but the popular understanding is that karma assures that good things will happen to good people and bad things to bad people. Karma in Buddhism holds that the fate of the soul is determined by its karma, its actions. Every act—whether good or bad, no matter how insignificant—will eventually return to the person who does it.

Most Westerners mistakenly assume the good or bad will come back during this lifetime ("what comes around goes around," as they say), but karma says that good (and bad) deeds will be rewarded in a future life, not this one. Furthermore, everything bad that happens to you is your own fault; karma says you deserve every moment of pain, anguish, and terror in your life, as you brought it upon yourself by some evil act in an earlier lifetime.

The New Age movement is also based on a form of resurrection myth. It is not a personal rebirth but instead a global one, a cleansing or renewal in which the antiquated, destructive old ways of thinking will be replaced by warmth and wisdom.

As fantastic as the world's resurrection stories are, they can't hold a candle to the legend of a friendly rabbit who dispenses colored chicken eggs to children once a year.