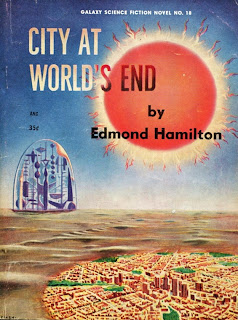 It's time to kick back and enjoy a .mp3 audio  version of a 1950s science fiction classic, "City At World's End," by Edmond Hamilton, a pioneer of comics and sci-fi, as narrated by Mark Nelson!  Thanks goes to Jesse Willis at SFFaudio for the find and his apt impression of book, "I’m halfway through...and am really enjoying it. The prejudices, assumptions, and attitudes of the townsfolk are all vintage 1950, but the idea quotient is very high. Hamilton has thought through a lot of the problems he makes his characters face." It's simply a blast from the past to hear a fifties sensibility delivered to your ears. Narrator Nelson provides smooth, flawless performance and large part in making book so enjoyable! It's almost as if your mind's eye is reading fifties science fiction! The author is equally fascinating, who published first story in 1926 at age 21. The Eight Miles Higher book review captures story slant on Hamilton and his 1951 book, "but juvenile comic-books paid even better than pulp-fiction. So Edmond Hamilton happily adapted to writing ‘The Legion Of Super-Heroes’ for ‘Adventure Comics’ too. And when he went on to script for ‘Superman’ he introduced elements from ‘City At World’s End’ into his picture-strip 'Superman Under The Red Sun' (‘Action Comics’ no.300, 1963). After all, a great plot-idea is not something to waste…" It's recommended to seek brief refuge in a fifties science fiction classic, you won't regret it!