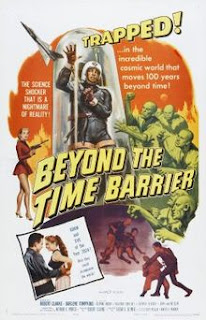 What lies logically beyond the sound barrier?  It’s, of course, the time barrier and year 2024!  Wikipedia supplies plot summary for the 1960 Cold War Era production of “Beyond The Time Barrier,” “U.S. Air Force test pilot Major Bill Allison (Robert Clarke) flies an experi- mental aircraft to sub-orbital spaceflight successfully but loses radio contact. He lands at his airbase that now is abandoned and seems old and unused. Mystified by his surroundings, he sees a futuristic city on the horizon… Allison discovers that he has entered a wormhole through time and has landed in the year 2024 that contains survivors from a cosmic plague that hit the Earth starting in 1971. The inhabi- tants of the dystopia who are dying out live in an underground city called The Citadel. They are led by the Supreme (Vladimir Sokoloff) and his mute and telepathic granddaughter Princess Trirene (18-year old, at the time, Darlene Tompkins). Against them are the literal outsiders, the bald violent mutants who seek to kill everyone they can. Also present are similar accidental time travelers labeled ‘scapes’; the Russian Captain Markova (Arianne Ulmer) who came from 1973 and General Kruse (Stephen Bekassy) and Professor Bourman (John Van Dreelen) who have come from 1994 to escape the plague of the time.” The film’s production and journey to the big screen is possibly more interesting, because the studio Pacific International Pictures went bust. American International Pictures, who first expressed interest but wouldn’t sign Clark (also film’s producer) to a multiple film contract, scooped up movie for lab costs. Studio parlayed luck by also capitalizing on publicity for “The Time Machine,“ a sci-fi classic released in same year. Clark was only paid his actor’s salary.  Please drop below fold to “scape” into Cold War Era black and white movie that flings you 11 years into the future.  The best part, as always, admission is free!