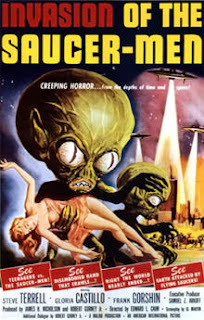 Do you ever wonder how you came into the world? Or how your parents, or even your grandparents, came about? It may be due to "Invasion of the Saucer Men", "the film was released as a double feature with "I Was a Teenage Werewolf," in 1957, according to Wikipedia. It's Saturday night in Hicksburg begins film, where every young hot-blooded couple drives out to Larkin's Lane, which is located on old man Larkin's Farm. Larkin, played by Raymond Hatton who appeared in 500 films with a star on the Hollywood Walk of Fame, seems under siege by young people. Film implies young people's lack of regard for boundaries. The young interested primarily in their immediate needs, parking or entering Larkin's unlocked farmhouse, when need arises to use a hand crank magneto telephone. The cantankerous old farmer determined to protect his land and cattle, accosts young couples at times with shotgun in hand. The film as sci-fi comedy does good job making excuses such as "it was little green men" seem pertinent to a young viewing audience. Johnny Carter and Joan Hayden, played by Steve Terrell and Gloria Castillo make perfect couple, young stars who offer their "grownups don't believe us" apologies, while framed for death of Joe Gruen (Frank Gorshin), substituted for a dead alien they hit with their car on Larkin's Lane. Gorshin, a unique actor, headlined in Vegas and New York venues as an impressionist, and also, shared a fateful billing on February 9th, 1964 Ed Sullivan Show where Beatles make their American television debut - a watershed event in pop culture!

Special effects devices in this film have a clear purpose. A severed alien hand with hitchhiking eyeball has intermittent role. A crawling alien hand ups the creep factor, providing excuse to hold others close "for safety" - a perfect excuse for cuddling! Protruding hypodermic needles in place of digits - old huge steel serious-looking hypos - dripping with alcohol, later in film, determined to be aliens' weapon of choice, makes for perfect Drive-In Theater fare! A You Tube highlight video of Larkin's bull taking on one of the little green men reveals level of camp as Larkin's bull succumbs to alien hypos! The movie's secret genius, is however, what better way to bring alcohol into a conversation? There's no need to figure one out, the film provides it! There's a sly shrewdness in this outdoor movie that can only be overlooked by adults whose hormones are in decline. Yes, it's a blatant excuse for sex drive-in fare with a script that has everything built-in to get you there! Late fifties was an era, where couples had to leave home and then when alone, surmount heavy inner inhibitions to get any! The gratuitous "screaming girl in distress" scenes supplied by Castillo are a plus. Movie is clearly a success for what it was intended: scare your girl, bring alcohol into mix - and get some! It's seems a plan to the present writer. You can book an evening for free with your partner and start watching below!