Retro Sci-Fi Weekend: ‘It! The Terror From Beyond Space!’ 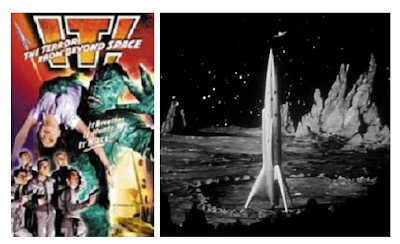 The 1958 science fiction thriller, "It! The Terror From Beyond Space," is great entertainment! The present writer wants to thank  HYPNOBOBS for refreshing memory as always been on mind to watch, again - if only could recall the title!  "It!" considered to be an influence on 1979 Alien, since storyline involves similar highly predatory creature stowing away to eliminate crew one by one!  It's the storyline that makes movie, as wondering who will be next, provides for suspense!  The production values are also good.  Hynpobobs points out poor choice of devices movie employed such as military rifles and grenades.  You have to ask:  what makes for cheaper props than surplus war goods?  The rocket appears quite sturdy - more like pressurized sub with thick hull -  stronger than present materials.  The aluminum can had just come out the year before!  The ship interior appears it could withstand gun play and grenades!  Kids will possibly find it more entertaining as storyline is similar to children's game of hide and seek.  The crew are trapped at the end in top remaining level of ship, when solution to overcoming alien presents itself!  It's good stuff and still downloadable for free - here!