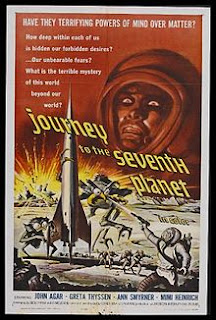 A 1962 sci-fi B-movie, "Journey to the Seventh Planet,"  filmed in Denmark for $75,000 USD and co-written and directed by Sidney W. Pink.  Pink credited as father of color 3-D movies, and also, for discovering actor Dustin Hoffman. A reader wonders whether beyond a strong exchange rate in early sixties, filmmakers also put casting couch to use on those Danish babes as a few appear in the movie?  The film does seem fixated on sexual fantasies at times.  Journey starts out with enlightened statement: "...the year is 2001 life has changed now Planet Earth is no longer wracked by wars and threats of annihilation...man has learned to live with himself."  We'll just have to scratch that goal.  Viewers, are informed, United Nations (UN) resides as global government and UN Space Explorer 12 gets dispatched on mission to Uranus.  Space Explorer 12 must survey a planet 64 times the size of Earth in 10 days and return "or lose their return trajectory".  Well, it's a sci-fi B-movie and we're asked to suspend disbelief! Movie did start with grand declaration, "there are no limits to the imagination," present writer would only add "except when it comes to sci-fi B-movies".

A badmovies.org review by Andrew Borntreger exposes film's paucity of special effects: "Voltage meters can be used to measure anything, from radioactivity to an atmosphere's oxygen content," the present writer suspects budget was blown on clothes for Greta and Ingrid!  The plot boils down to an alien presence, who uses crew's own memories, fears and desires - an id theme - to manipulate their minds a la - Forbidden Planet.  Id remains powerful beastly component of man's makeup, how do crew members fair against formidable subconscious foe?   Space Explorer 12 lands in a Danish forest a copy from a crew member's childhood.  The movie centers much of plot in crew's attempt to break through barrier or force field beyond forest, the alien presence concocted for them.  The crew slowly realizes they are under mind manipulation, but still manage to fall short in overcoming mind control.  The crew dallies away time well past their optimum return tragedy, getting to know the girls on Uranus better - possibly most believable theme in movie!

It's still an entertaining sci-fi B-movie from a period, where special effects were virtually imaginary. Journey, is perhaps, made more watchable due to sixties Danish babes  You may watch below to have alien "drain your mind... and bend your will ...and possess you" for 76 minutes below.  You can see whether you can resist Ingrid and Greta any better than the crew?  Admisssion price remains free!