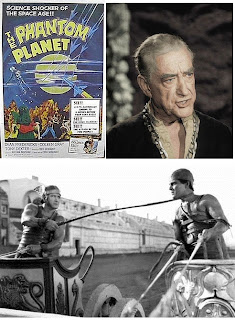 "The Phantom Planet," a 1961 low budget sci-fi film comes with caveat, viewers may suffer (original) Star Trek series deja vu!  The sets seem amazingly similar to later television series, but perhaps, it serves as a compliment to production that predates series by five years.   Dean Fredericks, as Capt. Frank Chapman, Coleen Gray, as Liara and Richard Kiel, as Solarite monster, star in film directed by William Marshall. "American International Pictures released it as a double feature with Assignment Outer Space," according to Wikipedia.  "In the future world of 1980 the United States Air Force's Space Exploration Wing has bases on the moon and is on the eve of a mission to Mars. When one of their Pegasus spacecraft with two crew members aboard mysteriously disappears, Mars mission pilot Captain Frank Chapman and his navigator Lt. Ray Makonnen are sent to search for them in their own Pegasus craft." A MST3K synopsis labels "Fredericks - a sort of Peter Graves manque," i.e., with similar qualities but less success. MST3K describes in merciless critique, "Soon, Chapman's spacecraft is damaged by the asteroids requisite to space films of the era. During an EVA attempting repairs, Makonnen [co-pilot] is lost to distinctly bad and ugly outer space. Chapman's ship is then pulled to the surface of a giant asteroid, which we learn is called Rheton, by some kind of ray." An early highlight, the extravehicular activity (EVA) supplies fifties concepts of space travel (images available here).  Chapman loses consciousness as spacesuit suffers meteorite damage.  Makonnen, played by Richard Weber, rescues Chapman to only become separated from craft and recites Lord's prayer as he drifts off - lost in space.


Rheton led by Sessom, Francis X Bushman, isn't much more than a space rock, where atomic bindings of the small asteroid, electrons and atoms are in tighter orbits.  The inhabitants mastered these atomic energies, possessing gravitational propulsion, weapons and defenses. The atomic characteristics of Rheton also result in minaturization, Chapman shrinks to six inches once he breathes Rheton air.  A literal Lillputian world in space, Rheton inhabitants include women, who run around in short cheerleader skirts.  Sessom informs Chapman after brief trial for striking out at first inhabitant to accost him, he must remain on their world for security reasons.  Chapman meets up with Liara and the mute Zetha - two of the chicks in short skirts.  The slasher critics from MST3K even admit, "on the bright side, he [Chapman] begins chilling with Liara, the beautiful, blonde daughter of Sessom, and the lovely, spooky, mute brunette, Zetha." A viewer is left to wonder, if Dolores Faith received enough coaching during shoot, to be granted dialogue late in movie?  MST3K chalks it up to Chapman below.

MST3K spots woeful contradictions in film. Rheton denizens, despite advanced tech,  live "...in Flintstones-like conditions - dimly-lighted rooms of
rough-hewn rock, with stone slabs for beds and stone tables. The Rhetons
don't need to eat because, it is explained, the atmosphere takes care
of their nutritional needs."  Sessom explains however, people on Rheton got soft and lazy when machines did everything, so an explanation is provided for their primitive living conditions.

The slice and dice continues as MST3K minces plot not words:

"Chapman becomes increasingly involved in Rheton matters. He finds himself attracted to Zetha, who mysteriously acquires the power of speech, apparently from inhaling Chapman's testosterone. Challenged by the hot-headed Herron (Tony Dexter from "Fire Maidens of Outer Space"), he fights the shirtless "duel of Rheton to the death" with the "combat rod" and the "linoleum tile of doom". (Guess how it turns out.) After dismissing Colleen Gray from The Leech Woman, he gradually wins Sesom's complete trust, is designated as his eventual successor and begins to feel ambivalent about returning to Earth.

Suddenly, a Solarite space armada launches a deadly attack on Rheton. Rheton is equipped with navigational controls that will be familiar to any theremin player, and the aforementioned gravity curtain, a device that destroys the Solarite armada by means of small curved lines painted on the film.

In order to advance the plot, a Solarite prisoner breaks out of stir and goes on a "rampage" - that is, if waving his arms about listlessly (lest the fragile costume fall off) and tenderly applying a Torgo-esque stroke to the sleeping Zetha's cheek qualifies as a rampage (the rampaging Solarite is our old friend Richard Kiel)..."

Francis X Bushman [picture, top right] represents biggest back-story, whose hey day were paydays in silent film.  Bushman donated land where Grauman's Chinese Theater stands, today. Most remembered for role as Messala in 1925 version of Ben-Hur [picture, bottom],  Bushman wore label of "King of the Movies" even before Clark Gable.  The silent film star proved decades-long obsession for Lon Davis, who wrote with wife biography: "King of the Movies: Francis X. Bushman."  The book manuscript was completed by 1983 but only published, finally, a few years ago.  Perhaps, Bushman was blackballed by Louis Mayer after all? An interview with author Lon Davis is available here.

Rheton survives Solarite attack, Sessom retires from fatigue
to his quarters, after sweating out battle at crystal controls.  Chapman
laments inner conflict between staying and returning to Earth. You'll
have to watch, "The Phantom Planet," to see how it ends.  Thanks goes to MST3K Wiki for their take! Admission is free!